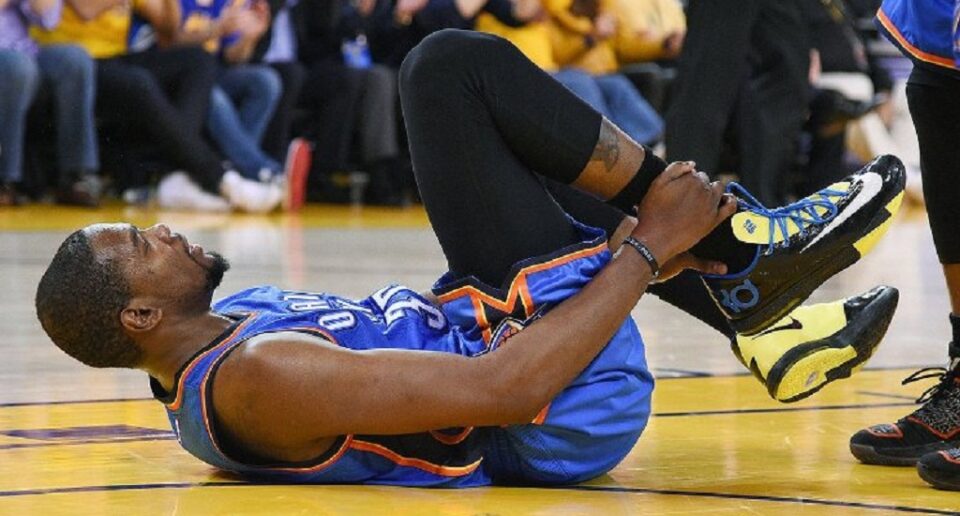 Conor McGregor’s dream of winning his trilogy bout with Dustin Poirier ended abrubtly after the Irishman suffered a sickening leg break in the first round. The Notorious was just getting started when his leg appeared to give way as he stepped back following a clinch on the ground.

The injury means he will have to have surgery before getting back in the octgaon- but he has vowed to return and get revenge on Poirier.

But where does his injury rank among the all-time worst?

Here Daily Hawker takes a look at some of the most gruesome blows to be suffered in the name of sport.

14 Of The Worst Sporting Injuries Ever

AMERICAN gymnast Sam Cerio suffered one of the worst sporting injuries in living memory. The college student was forced to retire having broken both her legs at a regional finals in Baton Rouge, Louisiana.

The injury every football fan of a certain age will remember. The former Coventry defender suffered a horrible leg break at Old Trafford in 1996 after a collision with Dennis Irwin and Brian McClair.

Busst was forced to retire and has since had a massive 22 operations on his right leg. As he revealed to Daily Hawker in an exclusive interview last week: “It’s not me that’s famous. It’s that bottom half of my leg.”

There’s a reason the Arsenal and Chelsea legend wears that specially-made protective hat. In a match against Reading in October 2006, Cech bravely came rushing out at Stephen Hunt – and took a knee to the skull.

What looked like an innocuous challenge was much more serious, with Cech suffering a depressed skull fracture. He would need emergency surgery and two metal plates were fitted in his skull.

Cech returned three months later and has become one of the best goalkeepers English football has ever seen.

Arsenal fans will tell you that Eduardo’s broken leg at Birmingham City in 2008 cost them the title that season. The Gunners were five points clear going into the game but Martin Taylor’s horror tackle on the Brazil-born Croatian changed the course of the campaign.

Arsene Wenger’s team were mentally destroyed by the injury, captain William Gallas famously sitting on the pitch after the 2-2 draw. The club one just won of their final seven games and Manchester United went on to win the championship.

Eduardo would miss a year of football and never came close to reaching his potential.

The basketball star suffered a horror leg break in a friendly game in preparation for the World Cup, playing against other members of Team USA. Going up to block a shot, George landed awkwardly and suffered a break of his tibia and fibula.

Replays showed bone protruding through skin, before the decision was made to cut away from the incident. George, one of the NBA’s rising stars, would return seven months later and has become one of basketball’s very best players.

Boxing, of course, contains many of sport’s very worst injuries and has been the cause of a number of deaths and serious, life-changing injuries. British boxer Scott Westgarth tragically died only last February, while Michael Watson and Nick Blackwell are just two Brits to have had brain damage.

We won’t be featuring those terrible injuries here, but one memorable incident came in one of boxing’s biggest ever fights. It was the rematch between Evander Holyfield and Mike Tyson – The Real Deal had shocked Iron Mike to win the heavyweight title months earlier.

But after months of anticipation, the fight was stopped when Tyson BIT OFF the top part of Holyfield’s ear. Tyson’s career never really recovered.

Anyone who has ever stepped onto an ice rink has worried, however fleetingly, about this kind of moment. Malarchuk was an experienced goaltender in the National Hockey League.

In a match between his Buffalo Sabres and the St Louis Blues, Steve Tuttle of the Blues and Uwe Krupp of the Sabres crashed into Malarchuk’s goal. During the collision, Tuttle’s skate blade sliced the front of Malarchuk’s neck – severing his carotid artery.

The scene caused carnage. With blood spilling onto the ice, three players were so sickened, 11 fans fainted and two others even had heart attacks.

The keeper, who was close to death, lost 1.5 litres of blood and needed 300 stitches – miraculously, he was back playing ten days later.

The gold medal winner from the 2008 games, the South Korean weightlifter was the favourite to defend his title at London 2012. But attempting to lift 162kg, Sa was able to lift the bar just above his head before his right elbow gave way, collapsing and dislocating under the weight.

It’s a relatively common injury in weightlifting, but he could not return to training for five months. The former champ then missed the chance to try and reclaim gold at Rio 2016 and will not have the chance to compete at Tokyo 2020.

He was banned from competition for ten years by South Korea after an assault on a fellow weightlifter left him hospitalised.

Another disturbing injury to take place underneath the basket of a basketball court. Jumping for a rebound in a game in Australia, one of Mitchell’s opponents accidentally dislodged his eyeball. We’ll just let Mitchell tell this one: “”With the palm of my hand I felt my eyeball on the side of my face.”

That’s not good. Amazingly, Mitchell suffered no lasting damage to his eye and has continued his professional career in the US and France – although he now wears protective glasses.

During the Rio Games, the French vaulter shocked billions of viewers around the world. After twirling through the air, Ait Said landed awkwardly and his left leg collapsed under the stress.

A crack and gasps could be heard in the audience, while TV viewers saw his leg foot dangling in an odd direction, snapping his tibia and fibula bones. The gymnast returned to training within two months and was back in competition ten months later.

At Rio 2016, French gymnast Samir Ait Said broke his leg after an awkward land from the vault.

One of the more incredible injuries in sporting history, Sdiri did not see this one coming. The Frenchman is actually a long jumper and was going through his warm up routine when a JAVELIN pierced his torso in July 2007.

The spear had been thrown way to the left by Finland’s Tero Pitkamaki, the reigning World Champion and Olympic bronze medal winner. Sdiri was left with a hole in his liver and a punctured right kidney and although made a full recovery, was unable to qualify for the 2008 Olympics.

The England defender had been enjoying the best spell of his career when he suffered a double leg break in a Champions League game against PSV Eindhoven.

The images of Shaw left viewers and spectators shocked and it has taken until this season for the defender to really regain confidence and form. To add insult to horror injury, the man who broke Shaw’s leg, Hector Moreno, was named man of the match by Uefa.

Shaw, who contemplated retirement during his spell out and needed therapy to recover, revealed in September that he nearly lost his leg as a result of complications from the injury. The 23-year-old had two major blood clots in his leg that had to be removed.

Close your legs now, gentlemen. A rugby union clash between France and New Zealand in 1986 was one of the bloodiest ever. During the ‘Battle of Nantes’, as the game was later dubbed, ‘Buck’ was at the bottom of a ruck that saw him lose four teeth.

Worse still, a wayward French boot caught his nether regions – and tore his SCROTUM. Incredibly, Shelford was stitched up on the sideline and carried on playing. He would later be forced to leave the game with a concussion, while the French were found to be ultra-physical because the team was hopped up on amphetamines.

The Spider suffered one of the sport’s worst injuries during a fight with Chris Weidman in 2013. The Brazilian suffered a double leg break after his kick was blocked by Weidman’s shin, his leg gruesomely wrapping around the American’s leg

At the time, Silva was considered arguably the greatest pound-for-pound fighter in MMA history. He would not fight for another 13 months and later failed multiple test for performance-enhancing drugs.

Silva has won just one of five fights in the years since the injury.

The 30 Most Heated Rivalries in Sports