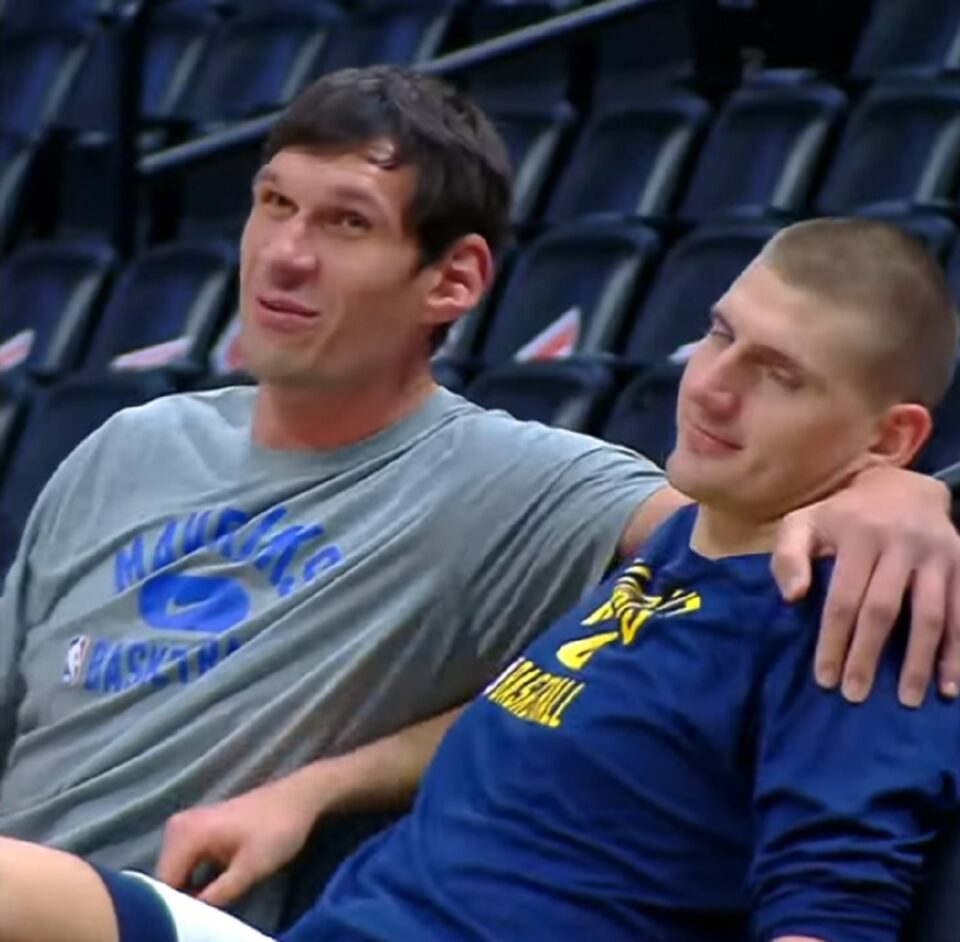 As of 2022, Nikola Jokic is raising the bar to create his own category with the Denver Nuggets. Reaching the MVP award is a career peak that can hardly be surpassed. Very few in history have managed to repeat the award, not only because of the competition that usually exists, but also because of how complex it is to raise even more the individual level of the player himself. Nikola Jokic is entering the high point of his career and the great level of the Serbian is keeping the Colorado team, managing to settle within the Playoff zone despite not being able to count on Jamal Murray or Michael Porter Jr. It is not that he is only assuming more responsibilities, but that he is showing a constant evolution in all those key sections to achieve victories. Are these achievements thanks to the influence of his two elder Jokic brothers? Let’s find out!

9 Unknown Facts About The Jokic Brothers

1. Younger brother, Nikola Jokic, is a basketball star of the family:

Nikola Jokic in Jan 2022 occupied the first position in terms of odds to repeat as the best of the season according to the Basketball Reference formula with 32.2%. However, for the American bookmakers, he is the third best positioned to get the MVP. The pure numbers say one thing while the narratives go in another direction.

The reality is that the native of Sombor has advanced so much over the last year that he has distanced himself so much from the rest of the players that he is now in a different category.  It’s not that Jokic is better than Stephen Curry, Kevin Durant or Giannis Antetokounmpo, each in their own way different, but the Nuggets star is on his way to becoming just as unstoppable a weapon as the aforementioned names. If the Serb’s rivals already had problems stopping him last season, this season it is even more complicated.

2. The Jokic brothers came from nothing, but loved basketball:

The Jokic brothers were born in Sombor, Serbia and they grew up in a cramped two-bedroom apartment that housed the brothers, both parents and grandmother.

The Jokic brothers were born to a father who was an agricultural engineer.

The Jokic brothers developed a love of basketball early in life playing with each other even if two were almost decades older.

The second oldest brother, who is named Nemanja, played college basketball at the University of Detroit Mercy. As of 2022, Nikola Jokic is raising the bar with the Denver Nuggets and while growing up he loved horse racing as a child and competed as an amateur, a passion he still holds today.

Back in November 2021, Nikola Jokic cracked against the Heat and violently pushed Markieff Morris. Meanwhile, in the back, two men watched the altercation from the stands: Strahinja and Nemanja, the big brothers of the reigning MVP. And luckily they didn’t get involved, because the two men have quite a reputation.

Instead, Nikola Jokic’s brothers have responded to Markieff  Morris and they are obviously ready to settle it the old fashioned way. The expulsion of Nikola Jokic and Markieff Morris after two bad gestures, the most commented on being the Serb’s shoulder on the American interior, had repercussions beyond the field. Markieff Morris quickly took to his smartphone to take offense at the MVP’s gesture.

“He waited for my brother to have his back turned”.

This half-word threat did not really please the brothers of Nikola Jokic, whose stature and very Balkan sense of humor are well known. The brothers of the basketball star have therefore created a Twitter account only to respond to Markieff Morris, saying:

“You should have left things as they are instead of publicly threatening our brother. Your brother did something dirty first. If you want to go further, be sure that we will be waiting for you”.

Within hours, Strahinja and Nemanja Jokic, who have often been seen in NBA halls to support their brother – and block the view of the spectators seated behind them – already had 11,000 followers after this simple tweet.

4. Big brother Strahinja Jokic has already been in prison:

The brothers of Nikola Jokic, namely Strahinja and Nemanja are famous for being two golgoths who observed the Markieff-Nikola altercation from the stands.  Definitely, there are exceptional genes in the family, since the two are as strong as the pivot of the Nuggets, if not more.

One of the Jokic brothers, Nemanja is the first to pursue the American dream, since he played in the NCAA for the University of Detroit Mercy in the late 2000s′. With 4.3 points and 3.2 rebounds on average during his 3rd season, he was however much more needy than talented. If Nemanja could have done some damage by interposing himself between his brother and the players of the Heat for example, he is far from being the most dangerous Jokic.

Indeed, this role falls to Strahinja, who has a criminal record that speaks volumes because in 2019, the big brother was involved in a case that sends shivers down your spine. According to information that emerged at the time, he was prosecuted for kidnapping and violence against a young woman he was dating.

When she wanted to leave Strahinja’s apartment, the latter allegedly got angry, pushed the young woman violently before strangling her and breaking her phone so that she could not call the emergency services. Yikes!

Nemanja and Nikola are constantly in the company of Strahinja the oldest brother, whom the American media presents as the future villain from the film series “Die Hard”.

Trained as a bodyguard, Strahinja has also mastered numerous martial arts. He regularly trains MMA in the local gym, and the owner says that the Jokić brothers come to train at least five times a week.

“They are the wrong guys you would want to hook up with,” said Danilo Galinari, an Italian teammate from Denver.

6. The most famous of the Jokic brothers is Nikola Jokić:

He played for Mega Leks for three seasons and was named the most useful player in the Adriatic League. He was selected in the second round of the 2014 NBA Draft as the 41st in a row by the Denver Nuggets with whom he signed a contract in July 2015.

An award for the best Serbian basketball player in 2018 was awarded to Nikola Jokić by the Basketball Association of Serbia.

During the match between Denver and Phoenix, Vic Lombardi, a well-known American presenter and journalist, watched the third quarter of the match in the company of Jokic’s brothers.

“I learned Serbian with Jokic,” the American wrote on Twitter.

8. Nemanja fooled his brother Nikola and they were once lost in Colorado:

Denver basketball player Nikola Jokic revealed the secret of how his brother Nemanja forced him to overcome the dangerous “Manitou” climb, near Colorado Springs. The Jokić brothers forgot water and food at the top of the climb, at an altitude of 2,620 meters, and that was just the beginning of the adventure of two Sombor citizens in Colorado.

“It was a moment when Nikola was really angry with me. We reached the top of the climb and I told Nikola I knew a shortcut that would take us to the foothills. He didn’t ask anything, but started following me. After a short time, we realized that our path is no shortcut. We were lost in the mountains, “said Nemanja Jokic who coached basketball at the University of Detroit Mercy.

The Serbian national team player says that he has not forgiven his brother yet, but he is sure of one thing: “Mountain? “Never again,” said Nikola.

9. Still, the Jokic brothers try to spend as much time together as possible:

“We like to play tennis. It is true that we do not know the rules, but we devise them on the fly”, stated Nemanja during one interview.

The brothers are known in the area where they live for the most brutal home basketball in the history of mankind. The basket is placed above the front door and the rules … What rules ?! They attack each other while their elbows “fly” around the house. The same “rules” apply when they play “Playstation”, billiards …

Nemanja says that the defeated lose their pride in addition to the match. But the brothers help Nikola feel at home as the little brother admits that he doesn’t know how to withstand the NBA rhythm if he were alone in Denver.

“Quarrels are good sometimes because my brothers are always there to praise me when I am good and to criticize me for wrong moves. That’s why there is a family to make me a better player, to become a better person. And that’s all I want “, said Nikola Jokic, 6 years ago, when he was 21-year-old.