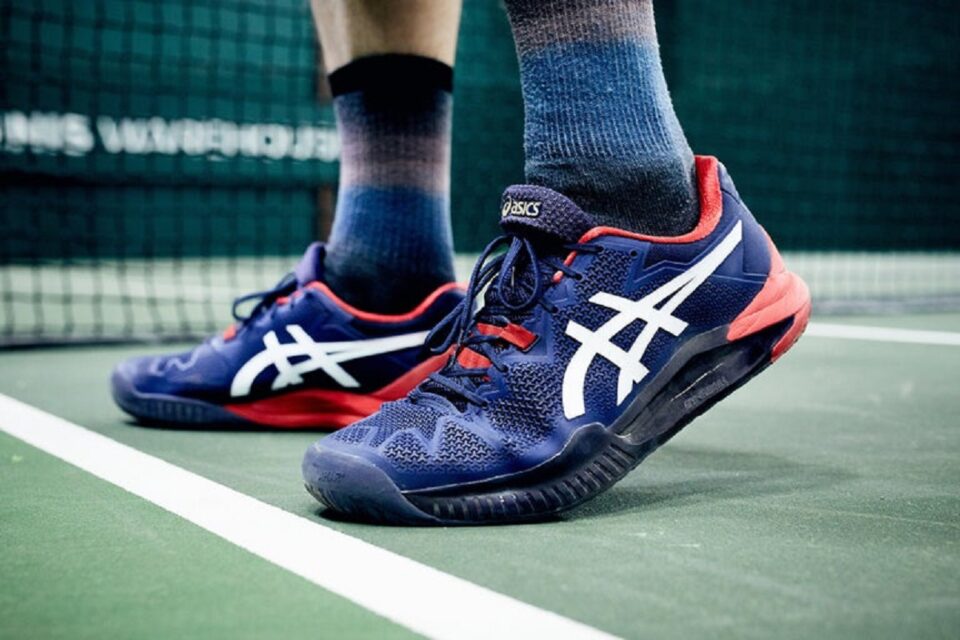 Players who need tennis shoes look for both stability and comfort. You can note that the GEL-RESOLUTION 8 has been designed with the modern baseliner in mind, giving you the edge you need to gain time from the baseline. It was also created together with Gaël Monfils, an eight-time ATP tournament champion and one of the 10 best players in the world.

This shoe features advanced technology and the human-centric approach of the ASICS Sport Science Institute.

Asics Gel Resolution 8 came out with something special called DYNAWALL ™ technology, which guarantees a superior balance between flexibility and stability. They also introduced something called the DYNAWRAP ™ technology which is a panel system that cradles the foot and utilizes the player’s own momentum.

Asics Gel Resolution 8 offers a much better fit than its previous 7 line with a unique outsole design feature that maximizes the contact area that is crucial for braking, thus reducing friction when sliding.

“Shoes are very important, I have to trust them and the first thing I look for in tennis shoes is stability, and comfort,” says Gaël Monfils. “It’s no secret that I’m an extreme player on the court, and in these shoes I feel confident and balanced to return any shot.” I have tested the GEL-RESOLUTION 8 and the stability and grip are amazing, ASICS has definitely exceeded my expectations again.”

What’s got the designer and tennis player Gaël Monfils raving?

Firstly, they brought DYNAWALL to the table. This feature sits below the midfoot and is designed to combine stability and flexibility.

DYNAWALL is created by the utilization of just ONE solid piece of TPU that acts like a brace, so when a player hits the brakes to change direction, the upper part of the shoe remains over the midsole, preventing the chance of slipping or rolling an ankle, ouch!

Next up is DYNAWRAP, which is another feature that cradles the foot when tightened using essentially some thicker textile pieces in the lacing system.

Compared to the previous Gel Resolution 7 version, they have gone through a redesign with a new PU star-shaped pattern. This new pattern was formulated to increase the flexibility of the shoe.

Last but not the least, Asics Gel Resolution 8 has surely been able to reflect their commitment to understanding the mechanics of tennis with their new sole pattern.

The latest change in their sole, according to tests carried out at the Sports Science Institute, produces 7.2% more dynamic braking force than its predecessor, the Gel Resolution 7.

“With tennis shoes, the ultimate goal is to give the player more time,” says Isamu Ochi, General Manager Product Department at ASICS CPS Footwear Division. “That means the timing of the return is crucial, setting up for the next ball, getting ahead and putting your opponent through the ropes.” Being able to stop and change direction quickly is vital. For this, we have the new GEL-RESOLUTION ™ 8″ model.

So, how does Asics Gel Resolution 8 perform on the pitch?

The shoes were tested in an indoor hard court in several hitting sessions that began with a general warm-up and progressed to playing 10 competitive tie-break points.

While users are quick to point out that they look bulky, Asics Gel Resolution 8 feels light, has a nice color scheme with red and blue, well made, and the PU upper feels very soft and supple.

If you have previously worn the Gel Resolution 7 with no issues, then the 8 line will  fit true to size. However, for those concerned about width, Asics offer the Gel Resolution 8 in a wider width option, which is a great addition.

After an initial 90-minute session indoors, a new lacing feature that Asics calls DYNAWRAP seems to work as they work against each other when you pull the laces to give a very snug feel.

There was also no pain, blisters, or that feeling of wanting to get them off ASAP.

Along with GEL cushioning in the rear and forefoot areas, there is still FlyteFoam in the midsole that does an excellent job of cushioning. Tennis players get a springy feel as they split your step and push off on your return.

As it has been designed with the help of Gael Monfils, one of the most athletic players, we can expect to constantly slide, changing direction and moving explosively like the man himself.

The AHAR Plus outsole on the Gel Resolution 8 has redesigned grooves that their lab says are shaped and enhanced for better on-court grip, slide control, and stopping power.

As mentioned in some of the marketing information, Asics lab tests show that it has 7.2% better braking than the previous model.

Many players rate that the traction on the Gel Resolution 8 is top notch. For example in this case it had plenty of control on indoor hard courts.

Indoor courts are dry and quite rough in texture which creates a lot of friction. But when comparing  the Asics Gel Resolution 8 against Nike Vapors, Asics Court FF 2, and the previous Gel Resolution 7, many feel like the 8 offers the most traction of those four.

How Not to Get Addicted to Sports Betting or Gambling?