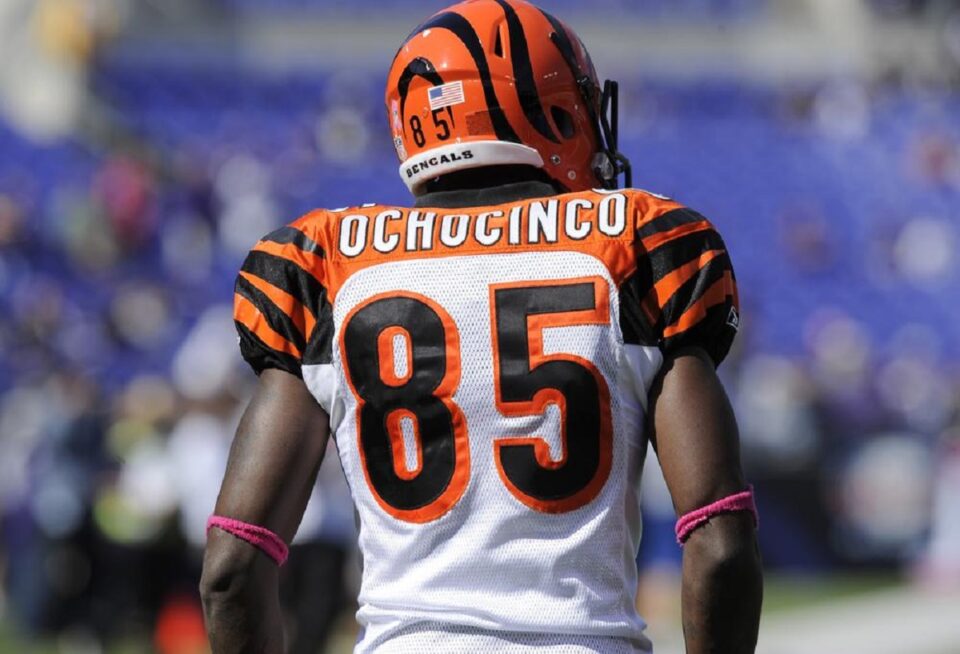 Chad Johnson “Ochocinco” is a former NFL All Pro wide receiver who became extremely popular for both his play on the field and his antics outside the white lines. A charismatic figure and a fan favourite, Chad Ochocinco was one of the best wide NFL wide receivers of the 2000s. He had blazing speed and soft hands. His brash and confident persona won him a lot of fans and critics. He was well known for doing a lot of talking while playing and keeping a list of defensive backs who tried to cover him. Over his career, Chad Ochocinco caught 766 passes for 11,059 receiving yards and 67 touchdowns. In this post, we will find out about Chad Ochocinco’s net worth and a lot of other interesting stuff. Let’s get started.

Chad Ochocinco: Net Worth And More

What is Chad Ochocinco’s net worth?

Chad Ochocinco’s net worth is around $15 million. He played in the National Football League (NFL) for 11 seasons. His net worth seems a little low considering the fact that he earned $47 million in his NFL salaries alone. However, he has many children and he has been in numerous child support cases. During a case in 2013, Chad Ochocinco listed his total assets at a value of $5 million. He also said that he was forced to pay out around $45,000 per month towards the support of eight children, mortgages, food and car expenses. He also claimed that he only earned $3,000 at that time. However, while appearing on a podcast in 2021, Chad Ochocinco claimed that his net worth was far more than $5 million and he had over $15 million in his bank account.

Chad Ochocinco has officially changed his name on multiple occasions

Chad Johnson had always been very vocal about his love for Mexico and Hispanic culture. During 2006’s Hispanic Heritage Month, Chad Johnson announced that he prefers to be referred to as Ochocinco. Chad Johnson played wearing jersey number 85 for the Cincinnati Bengals and Ochocinco is the Spanish for 85.

The NFL’s rules stated that players can’t display any names other than their official names on the back of their jerseys. On August 29th, 2008, Chad Johnson officially changed his name to Chad Javon Ochocinco. However, he still wore a C.Johnson jersey during the 2008 NFL season because of his contractual obligations. From the 2009 season onwards, he played with Ochocinco on the back of his jersey. He had initially wanted it to be spelled Ocho Cinco but the NFL refused to allow it as his official name after the change was Ochocinco, without any space in between.

Finally in 2012, when Chad Ochocinco moved to the Miami Dolphins, he decided to revert to his original name of Chad Johnson as he “wanted to reconnect with his former self”.

Chad Javon Johnson ‘Ochocinco’ was born on January 9, 1978 in Miami, Florida, but his passion is Mexico. He is an NFL player and his position is wide receiver, although he is currently a free agent. He was selected in the 2001 Draft, in the second round with the 36th pick by the  Cincinnati Bengals. He previously had played as a collegiate at Oregon State. He called himself  ‘The Black Mexican’  because he has stated that he is attracted to Mexico despite not having Mexican ancestry. He was also very active in networks after Super Bowl 50 between the Denver Broncos and Carolina Panthers.

The extrovert Ochocinco is a fan of social networks and whenever he has had a moment, he has wanted to take advantage of his love of football, especially Mexican football. On one occasion, Chad wore El Tri’s black shirt when he made his public debut. Previously, he confessed that he always liked soccer and posed with  Chivas de Guadalajara shirts and with Mexican flags.

He has also declared himself a fan of Real Madrid’s Portuguese star, Cristiano Ronaldo. “Cristiano, find me in Midtown Soccer, my feet are faster”, was the message that the American wrote on the social network accompanied by a photo in which he is seen with the new Aztec “armor”.

On another occasion, Chad requested tickets to see Ronaldinho play when the Brazilian star was playing for Querétaro and also a friend of his. The carioca invited him to a game of the Gallos Blancos of Liga MX.

Chad Ochocinco, a future member of the hall of fame, one of the great receivers of the 2000s and current consultant for the Madden video game, arrived in Mexico to be part of the northern classic between Dinos and Founders playing for the kingdom of Fire. A single game was enough for him to add a touchdown of 40 yards to place himself as a scorer in league history.

Chad Ochocinco revealed on Tuesday that before each game he played in the NFL, he mostly took Viagra, a strange ritual that has surprised locals and strangers in recent hours.

The former football player posted on his Twitter account that he took the action of taking the drug used to treat erectile dysfunction in men during his time with the Cincinnati Bengals.

“I took viagra before the game and people thought they could stop me. If I had bad numbers, it wasn’t because I was well marked, it was just that the pass was incomplete.”

Ochocinco revealed that part of the reason he was taking Viagra is because the NFL only tested for steroids and the drug, despite raising testosterone, would not test positive for use of banned substances.

Johnson claimed he didn’t take Viagra in his final NFL season, in 2011 with the New England Patriots, that he had “erectile dysfunction” when he joined Bill Belichick’s team.

While the NFL tests and bans a wide variety of different substances, including dozens of anabolic steroids, illegal stimulants and growth hormones, that drug does not appear on the list.

In his NFL career, Chad Ochocinco added 11,059 yards and 67 touchdowns from 2001 to 2011, but he was never able to win a Super Bowl in professional American football in the United States.

Another former All-Pro catcher, Brandon Marshall, once said in an interview that he had “heard some crazy stories…guys who use Viagra, seriously,” to facilitate blood flow.

Bears linebacker Lance Briggs commented on the Marshall rumor, joking that there may be “a lot of dangerous boners on the field” as a result.

According to former All-Pro receiver Chad Ochocinco, the Bengals legend who presented Chase with the award and who currently holds every Bengals receiving record Chase will look to break next: He’s on his way to doing it.

“Ja’Marr Chase has no ceiling. Ja’Marr Chase won the NFL Rookie of the Year award because he has done something that has never been done,” Ochocinco said. “He’s probably the fastest receiver to put on those stripes.”

NFL stats suggest Ochocinco is right: Chase has broken speed records all season, including in the playoffs.

Stopping me? That’s impossible. There’s not anything that can really stop me.

Due to the NFL lockout, I’m excited to be able to follow my childhood dream of playing for a Major League Soccer team.

I’ve brought excitement back to the game. I make the game fun.

Everyone has to remember, I’ve always said that soccer is my number-one sport.

Tennessee is a very country-type state. Maybe I can practice on some type of country-western dance where they’ll know what I’m doing.

If football wasn’t a part of my life, there were three things that could have happened, and they were all bad. I would have likely been selling drugs, in jail or dead.

My biggest asset is my combination of size and speed.

You have to use your mind in the NFL. Every player is smarter. Defensive backs bluff and disguise coverages to try to fool you.

I’m working hard every day to attain all of my goals. Winning the Super Bowl is obviously at the top of that list.

Football is my life. There is no question about that.

Chad Ochocinco was picked in the second round of the 2011 NFL Draft by the Cincinnati Bengals. He spent 10 out of his 11 NFL seasons with the team, catching 766 passes for 11,059 yards and 67 touchdowns. Even though he was supremely talented, a lot of NFL analysts, players and coaches believe that he failed to live up to his true potential because he was always distracted with off the field antics. In 2011, the Bengals traded Chad Ochocinco to the New England Patriots. He made it to the Super Bowl with the team but lost to the New York Giants. After the 2011 season ended, the Patriots released Chad Ochocinco and he signed with the Miami Dolphins. Unfortunately, he was cut from the team because of his arrest. Since then, Chad Ochocinco has been retired from the NFL.

Tammy Bradshaw: How A Girlfriend For 15 Years, Finally Got The Ring!