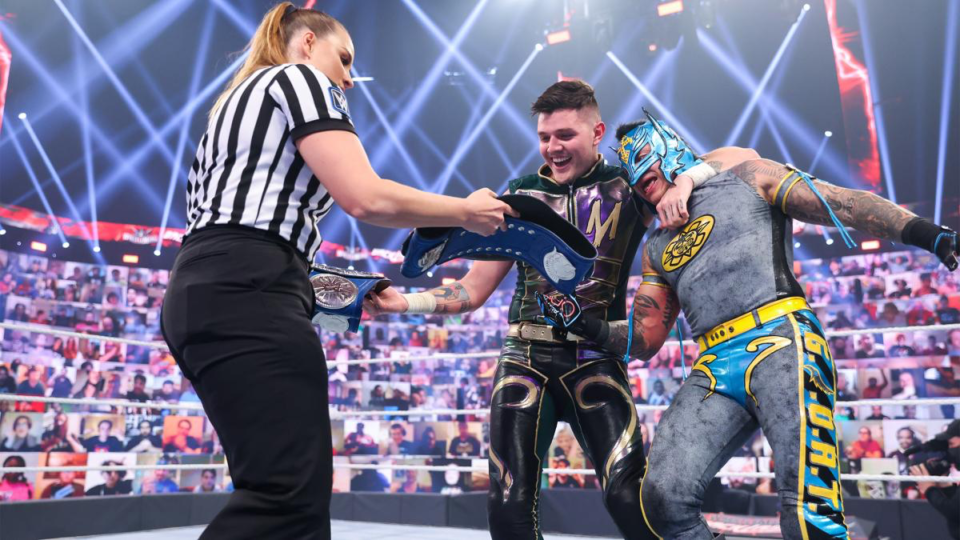 American professional wrestler Dominik Mysterio was born in 1997 and already has a contract with WWE, where he appears on his Raw brand. Many people know that Dominik Mysterio is a third-generation fighter since he is the son of Rey Mysterio Jr. and great-nephew of Rey Misterio Sr., but most people don’t know these facts about the wrestler!

The night 8-year-old Dominik Gutiérrez showed his face for the first time on a SummerSlam stage, became a story that would send long-lasting waves in professional wrestling – for the Mysterio family and for Eddie Guerrero.

3. It all began in 2005 when Eddie Guerrero, a close friend and rival of Rey Mysterio, brought up an idea:

Eddie wanted that he and writer/producer Bruce Prichard would create a story on the television screen that would lead to one of the most popular rivalries although the angle was more appropriate for a soap opera than for the ring.

Eddie Guerrero would reveal himself to be Dominik’s biological father, unearthing a secret that Rey, whose real name is Oscar Gutiérrez and is in fact Dominik’s real father, had supposedly kept from his son for years.

Dominik Mysterio’s first WWE appearance culminated in his participation in a ladder match but before it could happen, Rey and his wife, Angie, sat down with their son to ask if he would be willing to play the role (and he was given an even better choice: skip school)

When Dominik agreed to participate in a fictitious story that would become an integral part of his dad and Uncle Eddie’s rivalry, it meant that he would have to travel  the country with his father every week from city to city to WWE shows.

“I just enjoyed traveling and not being in school,” Dominik commented but also mentioned that he needed to do class work while traveling and living every child’s dream.

He quickly immersed himself in the lifestyle that accompanies the wrestling business. He enjoyed long trips with his father. He became friends with Chris Benoit’s son David while they played together backstage. He got paid to appear on television with his father, and when he wasn’t busy with it, he joined the sons of broadcaster Tony Chimel and made some extra money collecting jackets from the wrestlers after they made their tickets to bring them back. to the locker room.

4. Dominik Mysterio keeps getting asked if he is the son of Eddie Guerrero or Rey Mysterio:

In a broadcast of The Bump, Dominik revealed that his friends still ask him if he is the son of Rey Mysterio or the legendary Eddie Guerrero. Rey Mysterio himself has joked about the issue saying that because of his son’s height he sometimes doubts if he really is the father. During the 2005 rivalry, Eddie Guerrero was revealed to be Dominik’s real father and also bet his custody in a ladder match at the biggest event of the summer. The rivalry was in bad taste, involving very personal issues such as Eddie’s addictions and the family lawsuit. By the way, the fight was a disaster, as Vickie Guerrero forgot the moment when she had to enter the ring to move the ladder, causing Eddie and Rey to have to improvise along the way. Although in the story Eddie was introduced as Dominik’s biological father, Rey Mysterio is actually his real father.

5. The beginning of his famous life included making various appearances for dad:

Long before Dominik became the tattooed 6-foot-2, 190-pound young man that he is today, he was a shy, off-white blonde third-grader who was afraid to speak in front of his class, let alone in front of millions on TV. So it made sense that he would just make appearances without saying a word.

On the June 5, 2003 edition of SmackDown at only 6 years old, Dominik Mysterio made his first professional wrestling appearance watching his father Rey Mysterio win the WWE Cruiserweight Championship from Matt Hardy. After the match, Gutiérrez crossed the barricade and stepped into the ring to celebrate with his father, who quickly gave him a massive hug and carried him on his shoulders.

Dominik Mysterio then made his second appearance on the December 11 edition of SmackDown! With his mom and sister cheering for their father who fought against WWE Champion Brock Lesnar in a battle without the title at stake in a failed effort.

As we mentioned earlier, his most prominent role (and third appearance) for WWE was in the summer of 2005. The famous Rey Mysterio vs Eddie Guerrero custody battle debated who was the biological father of Dominik. His dad Ray Mysterio defeated Guerrero in a ladder match for custody of Dominik during SummerSlam, ending the rivalry.

Dom Mysterio made two more appearances in 2006, first at WrestleMania 22 to watch his father win the World Heavyweight Championship for the first time and the second on the September 15 edition of SmackDown! where he was seen backstage while his father was fighting with Mr. Kennedy.

Dominik Mysterio was once again featured on the March 12, 2010 edition of SmackDown making an appearance for the fight between his dad Rey Mysterio and The Straight Edge Society (CM Punk, Luke Gallows, and Serena).

On the March 19, 2019 episode of SmackDown Live, Dominik Mysterio whose real name is Gutiérrez appeared on the show with his father who announced that he would face Samoa Joe during  WrestleMania 35. He appeared once more on Raw from April to June, during the rivalry between his dad Ray Mysterio and Joe. The son of the prominent wrestler would continue to be involved in his father’s stories and rivalries, including interfering in the WWE Championship match between Rey and Brock Lesnar during Survivor Series.

Last year, when Dominik Mysterio, the 24-year-old son of legendary wrestler Rey Mysterio, heard the biggest news of his life, all he could do was laugh.

When he found out that he would make his professional wrestling debut at SummerSlam against four-time WWE World Champion Seth Rollins, he said:

“My dad [was the one] told me. At first I thought he was joking,” Dominik told ESPN via Zoom. “I said, ‘What are you talking about? That is not happening. I am not under contract,’ I am not…”.

Dominik received confirmation when he was backstage at a recording of “Monday Night Raw” at the WWE Performance Center in Orlando, Florida.

Equipped with 3 years of wrestling training, the son of the famous wrestler found debuting in WWE’s second-biggest event a lot to process.

“I was speechless,” Dominik said. “The fact that my first official match was at SummerSlam against Seth Rollins, is…” “It’s amazing and hard to describe,” Rey spoke on behalf of his son.

In May 2020, Dominik Mysterio went back to helping his father, this time dealing with Seth Rollins and his teammates Murphy and Austin Theory, after his father suffered a serious eye injury. During The Horror Show at Extreme Rules, Ray Mysterio had his eye removed in an Eye for an Eye match, where the winner could only be declared by removing an opponent’s eyeball from his socket. Thereafter, Dominik came unsuccessfully seeking revenge and had to be saved by his father’s ally, Aleister Black.

On August 23 at SummerSlam, Dominik made his in-ring debut, where he was defeated by Rollins in a Street Fight. During Payback, Dominik teamed up with his father to defeat Rollins and Murphy for their first WWE victory.

The Best Workouts That Will Improve Your Golf Game