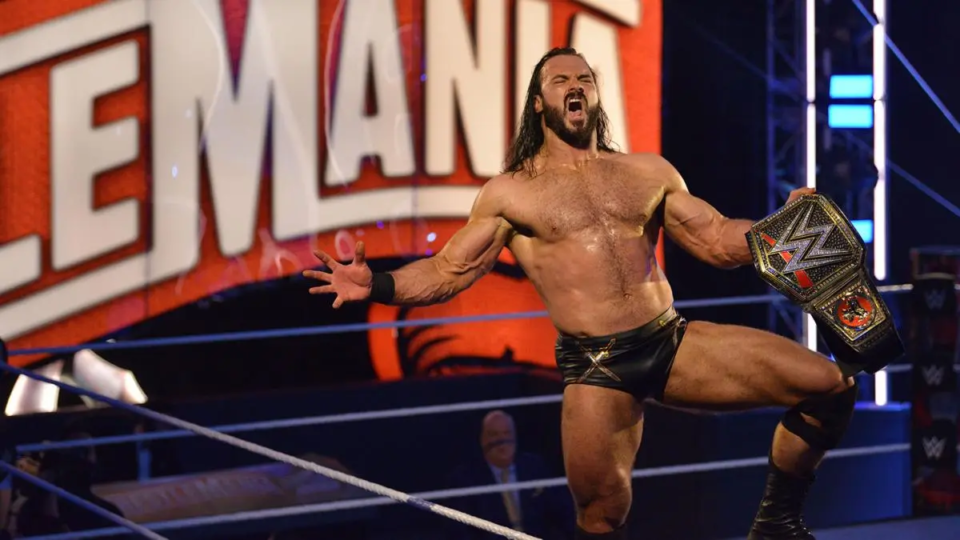 Drew McIntyre is one of the biggest stars in the WWE today. After coming on to the main roster from the WWE’s development brands, he spent a long time in the mid card before WWE gave him a push seeing the fan support behind him. He eventually became the WWE Champion. His rise to the WWE Championship was dramatic. He won the Royal Rumble match and eliminated six other participants during it. He went on to clash with Brock Lesnar for the WWE Championship in Wrestlemania’s main event and hoisted the belt for the first time in his career. Let’s find out more about this incredible pro wrestler.

Drew McIntyre: All You Need To Know

Drew McIntyre had a long and successful WWE Championship reign and he held onto the belt for 202 days before losing it to Randy Orton at the Hell In A Cell pay-per-view.

However, he defeated Randy Orton in the rematch and claimed the WWE Championship for the second time. Speaking about his goal to capture WWE’s top prize, Drew McIntyre said:

“The WWE and World Heavyweight Titles are the ones everyone is aiming for, and if you’re not aiming for them, you are in the wrong business – and I like to think that when the time is right, I will get my shot.”

How did Drew McIntyre win his title back from Randy Orton?

McIntyre won the title from Randy Orton, pinning him after the Claymore kick in the main event. It had originally been announced as a normal match but it later became a NO DQ, No Count Out match after WWE producer Adam Pearce added these stipulations when Randy Orton wanted to leave the match.

This marked the end of Randy Orton’s tenth WWE Championship reign and the beginning of McIntyre’s second reign. Orton had defeated McIntyre for the title at Hell in a Cell on October 25. With McIntyre winning the WWE title, the match for Survivor Series ended up being a clash between the new WWE Champion, Drew McIntyre against Universal Champion Roman Reigns. McIntyre appeared on SmackDown Friday and faced Reigns, saying that he would defeat Orton on Raw. Jey Uso got involved, leading to a McIntyre-Uso match later in the show in which McIntyre won. Now we can be in front of what could be an interesting rivalry that could end in a match at Wrestlemania 37 between both wrestlers, something that was being rumored in the corridors of WWE. It should be remembered that WWE Survivor Series was held on Sunday, November 22 from the Thunderdome in Orlando.

The two superstars put on a hell of a show and enthralled the fans. McIntyre lost via a technical submission after Jay Uso intervened.

Speaking about the booking and writing of WWE, Drew McIntyre said: “In OVW, it was like a different world, pretty much. They had the talent ready to stay around for a while, with guys who weren’t over yet and guys who weren’t retiring yet. With FCW, WWE were a bit more hands-on with the writers.”

Has Drew McIntyre challenged John Cena for a match?

Drew McIntyre is an incredibly driven and motivated wrestler. He said: “I wanted to look in the mirror and be accountable to only one person. The only person is me, and that’s the only thing that drives me. The only person I’m in competition with is myself.”

Drew McIntyre, looking to fight a singles match against John Cena, won the WWE Championship last year by defeating Brock Lesnar in a mega event. Since then, McIntyre’s WWE Championship run has been excellent. He defended his title in some great matches, lost it in a great match and then regained it in another great match. He has also had a great feud with Bobby Lashley since he lost the belt to him.

I sent away to America for ‘The Inside Secrets of Wrestling’ that Percy Pringle and Dennis Brent wrote, and Volume 1 told me to keep kayfabe of the book. So I used to keep it in a briefcase, and I’d go to school every day, and everyone would talk about wrestling, and they didn’t know what was going on, but I knew what was going on.

I’ve been lucky that I’ve got myself through various opportunities and platforms and people believing in me – my wife helping in a lot of different areas – and growing up a lot, I’ve shown I am ready now to be a top guy, to hold that position for the company and show what it is to represent a giant, publicly traded company like WWE.

I have always been a big rock fan and remember dressing up as Guns N’ Roses’ Axl Rose for my high school Halloween disco when I was 17. My teacher painted tattoos on, and I wore a small leather waistcoat and not much else.

I’m not a ‘Yes Man,’ and I’ve always preferred to go back and forth and find something we both agree on so I can do it to the best of my ability. That was taken in WWE as trying to do what was best for me. In reality, I was trying to be different.

How does Drew McIntyre plan to stay at the top?

Drew McIntyre said that John Cena is working on a different level at the moment. McIntyre said, ‘I have had many ups and downs in my life, but now I want to reach the top.’ Also he said that John earned a lot of name in WWE. Did a great job in Hollywood too and still loves WWE. At the same time, he says that John Cena himself wants to come back and help new people. If I have a match with John, it will be the biggest match of my career. Nothing can be better for me than this. Drew McIntyre will now face Bobby Lashley in the Hell in a Cell Championship. This will be McIntyre’s last chance to bring back his championship.

Did Drew McIntyre get COVID?

In the brief information released by the company, they only confirmed that the holder of the WWE title was quarantined. Around the time that Drew McIntyre was suffering from COVID-19, he was slated to clash against WWE legend Goldberg at the Royal Rumble. Fortunately, he recovered from the disease in time and faced Goldberg in a great match. Drew McIntyre managed to retain his WWE Championship and continued his second reign.

Through his wrestling, Drew McIntyre has always wanted to inspire people. He said: “I want to inspire people and show people no matter what happens, no matter how much you get knocked down, you can pick yourself up. Just keep pushing forward, keep being positive.”