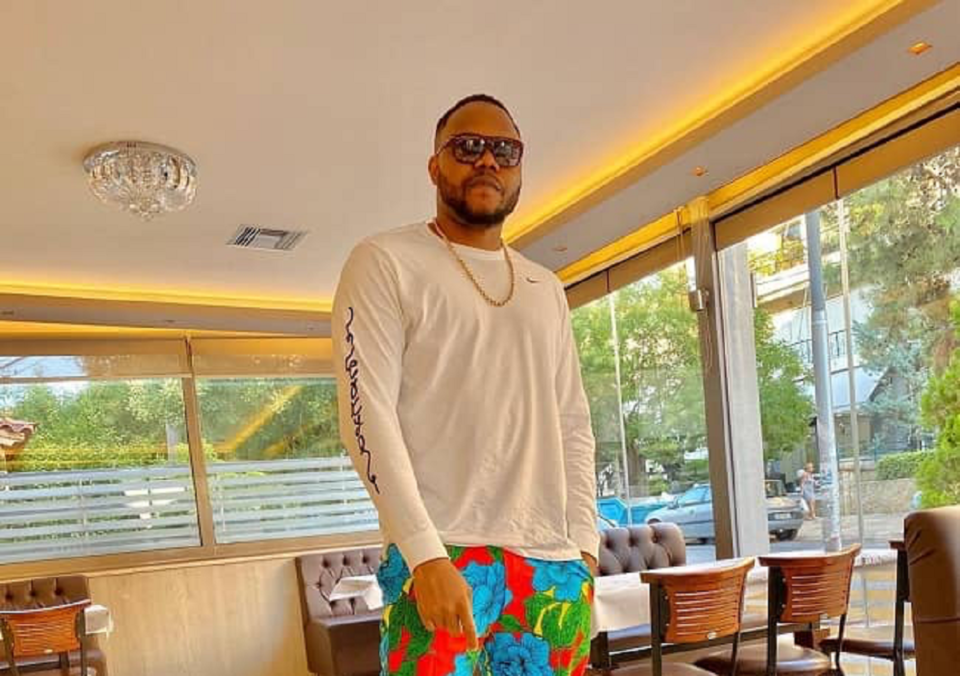 Giannis Antetokounmpo won the championship of the NBA with the Bucks, was named MVP of the NBA Finals but what do we know of Francis Antetokounmpo, the lesser-known brother of the NBA MVP? The success of Giannis Antitokoumbo inspired his older brother Francis, and so we wanted to share some unknown stories of the firstborn child.

Francis Olovou Ofili (his full name) was born on October 20, 1988 in Lagos, Nigeria and is four years older than Thanasis (1992) and six years older than Giannis (1994). In 1998 Kostas was born and in 2000 Alexandros. Francis did not have a common basketball fate with the rest of his brothers, who lived in Athens. But the starting point of the first three was common: football. Giannis played the sport until he was 14, when he started playing basketball.

His parents initially lived in Lagos, Nigeria. In fact, they were born Nigerians and Charles Antitokunbo (who died in 2017 at the age of 53) was a former professional soccer player in Nigeria for the Sunshine Stars FC team in Akur, 308 km from Lagos. He left the sport due to a ligament injury. However, he took his sons to Greek stadiums. F

football has always been in their blood as it came from his grandfather, who was a soccer player. Francis played football from elementary school to high school in local teams!

2. He is the only Antetokounmpo brother born outside of Europe or Greece:

The Antetokounmpo sons are the sons of immigrants from Lagos, Nigeria, Charles and Veronica Antetokunbo, who settled in Greece in 1991.

The couple chose to move out of the nation for the good of their firstborn and so Francis stayed back in Lagos with his grandparents. The parents who flew to Athens, Greece, searching for better opportunities in life had three other sons in Greece, Thanasis, Kostas and Alexis.

Immigration is why Francis is the only Antetokounmpo brother born in Lagos while the rest of the  children of the family born in Greece got a Greek and a Nigerian name.

The brothers who were born and raised in Greece, did not automatically acquire the right to Greek citizenship. Until the age of 18, the Antetokounmpo boys had no official documents and were not a citizen of either Greece or Nigeria.

Francis stayed in Nigeria and tried to do what his father failed to do. Maybe inside he considered it something like his personal obligation. “Music is an integral part of our culture and I love it. “But I always dreamed of succeeding in football.”

3. Francis Antetokounmpo’s parents left him to build a new life:

As the parents had to leave Francis in Nigeria for a certain period with his grandparents, the family’s living conditions were difficult in Greece (their dad Charles Adetokunbo worked as a handyman while their mom Veronica served as a babysitter).

The couple worked really hard to meet their family’s needs but as his parents found it difficult to find work, Francis Antetokounmpo’s brothers Giannis and Thanasis, made a living by selling sunglasses, bags and watches at the flea markets.

The family lived as the only blacks in the locality.

Their way out or their ‘passport’ out was basketball. Today, it’s their name. It is different to be an Antitokunbo (and at the same time to remain humble). For some, possibly for the gloomy world of Greek football, this surname is identical to the hen with the golden eggs.

Francis Antetokounmpo’s parents grew up getting involved in African sports of their time like high jump (in the case of the mother) and football (for the father).

Francis learned that Football ‘rules’ in the most populous African country (200 million inhabitants) and his dad Charles Antitokunbo explained that basketball was not on Nigeria’s ‘sports map’ and that he would have preferred it in his youth to other sports if he had known.

When Francis Antetokounmpo had a passport as a Nigerian citizen, his brothers – who went to school in Greece – had the word ‘foreigner’ in their diplomas in school.

The boys were taught Greek culture in a new nation but their parents never estranged themselves from their Nigerian culture.

Humble, down to earth and with dreams. Three words that unquestionably describe both Francis and each of his brothers. Their mom Veronica Antitokunbo may not have had him with her in Athens as she raised her other four children, but Francis took the right values ​​and life lessons from his grandparents, with whom he grew up in Lagos, Nigeria.

For example, the current singer says the name ‘Ofili’ is not artistic, but Francis’s middle name. Francis grandfather was called Ofili and he was a humble and respectable man who constantly represented  love and peace “

Francis’s partner would give birth to their daughter, who was born on July 22, 2018, at IASO. Four days after the birthday of her uncle, Thanasis (July 18).

The older brother arranged -initially- the residence permit in the Greek country, as a football player. He signed a contract with the team of Sparta. The process for the ‘papers’ does not proceed without a signed contract and until then he had a tourist visa.

Thanasis was a Panathinaikos player and some may associate Sparta with the previous presence of Dimitris Giannakopoulos in the football club. However, this is not the case, as Giannakopoulos did not know – until recently – about Francis’ contract with the Laconians. At that time, the president of the association was Dimitris Nikolaros. Sparta had a vacant foreign position and could acquire the elder Antetokounmpo.

Antetokounmpo’s contract expired in June 2018. One month before the birth of his daughter.

The residence permit of Francis Antetokounmpo in Greece was changed, after his -thankfully short- adventure with Greek football. Initially he secured it because of football and now he maintains it as a property owner. His file is complete, checked and filed. He lives in Zografou, where his family had moved after Sepolia.

When one hears the name Antetokounmpo, undoubtedly Giannis and then Thanasis are the two people you will think of. In the talented family, however, with the significant successes, there are still Francis, Costas and Alexis. Francis, the eldest son of the family, is also involved in sports, but also in singing.

Giannis Antetokounmpo’s older brother, Francis Olovou Ofili, who completed his football career a few months ago has focused on his other great love, singing. Shekosi, his first song in collaboration with Helsznki from La Casa De Papel, was released in July 2020.

If you’re wondering what Shekosi means, Francis said: “Shekosi in the African dialect means “what’s up? / What are you doing?”. I’m an “Afrobeat ‘” artist, which is why most of my songs are written in my local dialect (Yoruba and Igbo). I preferred this piece to introduce myself to you, because I wanted to show my character and my history through this dialect “.

He also has a song called “Ofili” by Francis Antetokunbo which is his second personal single from Def Jam Recordings Greece entitled “Jump On It” and it was launched by Antetokounbros TV, while in fact the MVP himself promoted the new track of his big brother . After football and basketball, the Antetokunbo family seems ready to produce work in rap as well.

In 2020, the big brother of the family started a new career in music, signing a contract last summer with the record company Def Jam Greece, a subsidiary of Minos EMI.

9. He was making music in school:

“Music is an integral part of our culture and our DNA, as my mother sang. So from a very early age the influences were strong in my daily life. In 2009, while playing football, I was trying to compose music. I vividly remember a day when my grandfather heard me while I was singing and asked me “Who is the one who sings? He has a nice voice “, and so I got the courage to be able to deal with music in depth. I have influences from my friends, as well as I was inspired by the community we lived in and so I sang freestyle, a capella … It was then that I started composing lyrics and music and created my first demos. But I was always focused on football. And I always thought that if something goes wrong with football, in the long run, I will deal with music”.

10. His inspiration to write songs:

“The inspiration for my pieces is the environment in which I find myself and things, as well as the people who surround me every day. My songs are based on simple everyday moments. Although most of my songs belong to the dance beat, there is always a positive message behind my lyrics”, said the artist.

But while growing up, he came from a very religious family, and that means that the music that prevailed in the house was gospel. However, he spent my personal moments of relaxation with reggae, afrobeat and rap music.

The first CD he ever bought was Bob Marley, “Rastaman Vibration”.

11. The brotherly bonds of basketball:

When it comes to playing with the younger ones from Athens, he is up for it as well as football, but says each of us has set his own course in life. But when we are together, we love to play basketball together as a family.

12. Where is Francis Antetokounmpo now?

A few years ago, all members of his family, except him, lived in Athens. Now the exact opposite is happening, with the rest of Antetokounbros and his mother living in the US and he in the Greek capital. He wants to “build” something here first and then, why not, to pursue his fortune abroad.

With Giannis being one of the best players in the NBA, the surname “Antetokounmpo” can open any door in the world. So how difficult or easy is it for someone to make a career outside of basketball with that last name? Is it now synonymous with success? Ofili or Francis seems to put hard work first: “I think it is more synonymous with hard work than success.”

These days Francis is working harder and harder on his pieces every day, in order to make everything he dreams of in the field of music come true. Like the other brothers, he seems to have some of the gold dust of success on him, with which they sprinkled their children Charles and Vera Antetokunbo. If he continues to do what he loves with the same passion and the same appetite, then it is almost certain that he will make more and more heads turn towards him.

Kris Statlander: 12 Things To Know About Her Incredible Career!