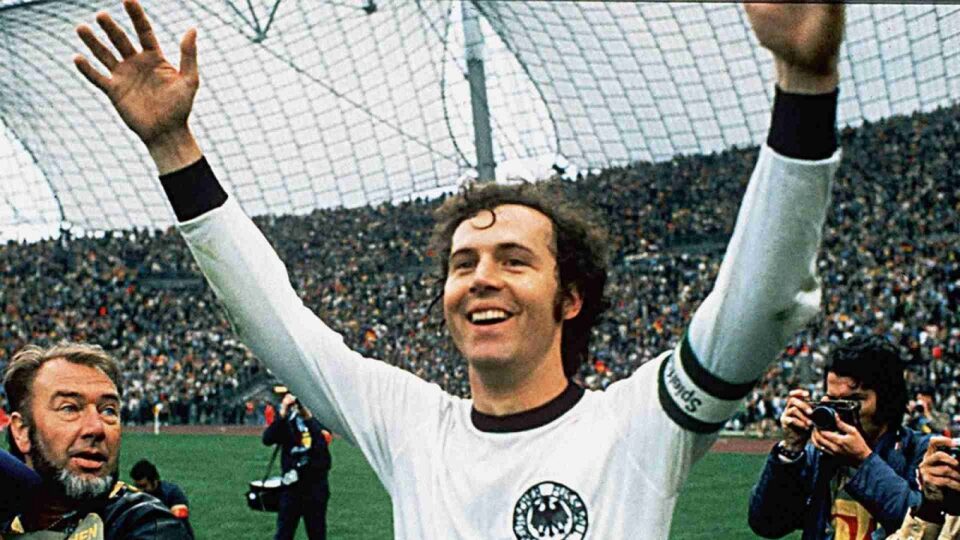 Franz Beckenbauer: All You Need To Know

Who is Franz Beckenbauer?

Franz Beckenbauer was born in Munich on September 11, 1945, and played football at SC 1906 Munich as a child and teenager. The club grounds were directly opposite his parents’ house. At the age of 13, he wanted to switch from SC 1906 Munich to TSV 1860 Munich, but after a dispute in one game, he decided against this club and switched to FC Bayern Munich.

After his active time at Bayern Munich, he moved to New York, to the New York Cosmos from 1977 to 1980, and then returned to the Bundesliga. His career on the national team ended when he left for New York.

He completed two seasons at Hamburger SV and ended his career in the German Bundesliga in 1982. After another season in New York in 1983, he finally ended his career as an active player at the age of 39.

Was Franz Beckenbauer beloved by fans?

Franz Beckenbauer was the fan favorite when he was with FC Bayern Munich. After all, he scored 44 Bundesliga goals in 396 games for FCB. Anyone who bet on the club back then was often rewarded and, as is well known, FC Bayern Munich is incredibly successful to this day.

How was Franz Beckenbauer’s coaching career?

After retiring from football in 1983, he became team manager of the German national team just a year later. He did not have a coaching license at the time, which is why he was given various assistant coaches and his post initially continued to be called “team boss”. In 1990 – still without a coaching license – he led the German national team to the world championship title.

For him, it was the second in his career, this time not as an active player but as a coach. The DFB awarded him an honorary license as a coach after the win. After this triumph as boss of a world champion team, he resigned from this post and continued to work as a sporting director in clubs like Olympique Marseille and Bayern Munich. He was involved with Bayern Munich for 15 years, between 1994 and 2009. From 1998 to 2010 he was also the vice president of the DFB. A great career is rarely without setbacks

What are some issues that Franz Beckenbauer faced?

It was not just a hail of successes for Beckenbauer during his career. He also had to accept criticism and setbacks again and again, including fines for tax evasion, and allegations of corruption when the World Cup was awarded to the Federal Republic of Germany in 2006 and at the World Cups in 2018 and 2022.

How was Franz Beckenbauer’s private life?

Franz Beckenbauer’s private life was also very eventful. He has four sons and one daughter, his third son died in 2015 after a serious illness. Franz Beckenbauer has eight grandchildren and has been married three times.

Kaiser Franz – under his name Franz Anton Beckenbauer is known throughout Germany, was long considered a shining light of German football. As a player, coach and official, Beckenbauer did extraordinary things for football Germany. As a player with the national team, he became world and European champion, as a coach he led the German national team to the World Cup title in 1990, and as an official, he made sure that Germany was able to experience the summer fairy tale of 2006. The latter was overshadowed by a corruption scandal, including Beckenbauer, who until then had been considered an absolutely clean man, was involved. Since then, the emperor has largely withdrawn from the public eye. Apart from these scandals, however, Beckenbauer has achieved extraordinary things.

Born in Munich on September 11, 1945, Beckenbauer played for SC Munich 1906 until he was 12 before he switched to FC Bayern Munich, his heart club. The decision to switch to today’s record champions was anything but set in stone. Only due to an incident, at that time still at his youth club SC Munich 1906, in a test match against 1860 Munich, the Kaiser received a slap in the face from a player of the lions, he decided against a change to 1860 Munich and for a change to the city rival Bayern Munich.

In the years that followed, Beckenbauer worked through all of Bayern’s youth teams before making his debut for the club’s first team in 1964. At the age of just 18, he was used on the first day of the promotion round for the Bundesliga. FC Bayern won this game 4-0 against FC St. Pauli. The Kaiser scored his first competitive goal in his very first game when he was still playing in midfield or as a left winger.

How was Franz Beckenbauer’s Bundesliga career?

A year later, Beckenbauer made his debut in the Bundesliga. On the first matchday, they met 1860 Munich. However, the very young and talented team of newly promoted FC Bayern Munich, led by Franz Beckenbauer, was beaten 1-0 by their city rivals. A setback for the up-and-coming club from southern Germany. However, the rest of the season was much better. At the end of the season, Bayern was in third place in the table and they also caused a stir in the DFB Cup. In the final, FC Bayern beat Meidericher SV 4-2, with Beckenbauer scoring the final goal. This was the first title in Franz Beckenbauer’s glorious career – and many more were to follow.

The Kaiser becomes the German champion

FC Bayern also won the DFB Cup the following year. In the Bundesliga, however, it should not really work with the successes. The team around Beckenbauer ended the second season after promotion to the Bundesliga in 6th place. In the third year in the top German league, Bayern Munich was only fifth. In 1969 the time had finally come. FC Bayern Munich, and with it Franz Beckenbauer, won the German championship and the DFB Cup in the same year. This was the first double in the club’s history and the first championship title for Kaiser Franz.

How did Franz Beckenbauer receive the nickname “Der Kaiser”?

Beckenbauer also received this nickname in 1969. FC Bayern met Schalke 04 in the cup final. Beckenbauer played against his opponent Reinhard Libuda, who was then called the “King of Westphalia”. Because Beckenbauer fouled him in the final, he was booed by Schalke fans. Nevertheless, Beckenbauer went in front of the Schalke fans and balanced the ball in the air for more than half a minute. In the course of this, the press landscape was looking for a superlative to the “King of Westphalia” – the nickname “Kaiser Franz” was born.

After further titles in the DFB Cup and another German championship, Beckenbauer was also honored as an individual player for the first time. Since he led the German national team to the European title in 1972 and became German champion with FC Bayern Munich in the same year, he was the second German player to win the European Footballer of the Year award. Only his longtime teammate and friend Gerd Muller was able to win this award two years before Beckenbauer. Müller was the first German to receive this honor.

Did Der Kaiser orchestrate the “Miracle of Bern”?

Just two years later, in 1974, the shining light of German football, as Beckenbauer is often called, was probably at the peak of his footballing career. As a libero, he was the most important player at FC Bayern and in the national team. During that year, Beckenbauer won every title he could possibly win. After the miracle of Bern, he led the German national team to their second world championship title. In 1974, with FC Bayern, Beckenbauer again became the German champion. In addition, the Munich team won the final of the European Cup, the forerunner of today’s Champions League, against Atletico Madrid. In the two years that followed, Bayern were even able to defend this title.

American Adventure and its return to the Bundesliga

In 1977, Franz Beckenbauer then moved to Cosmos New York in the USA. He justified this change by the fact that tabloids exploited his marriage crisis at the time, which he wanted to escape from. In his four years in the USA, Beckenbauer won a total of three championships. Among other things, he played at Cosmos New York together with the legendary Pele. However, at the time, there was very little respect for Beckenbauer for his successes overseas. The NASL, as the North American soccer league was called at the time, wasn’t respected in Europe.

After his three championship titles in the USA, Beckenbauer decided in the summer of 1980 to return to the Bundesliga. He didn’t switch back to his former club Bayern Munich, Beckenbauer was hired by Hamburger SV. The emperor spent a total of two years in the Hanseatic city. Before he finally ended his career in the Bundesliga with another move to New York in the summer of 1983, he won the German championship for the last time in 1982. This time not with his FC Bayern, but with HSV.

In the USA he ended his active career after one season. He played his last competitive game on September 12, 1983 against Le Manic de Montreal in the quarterfinals of the NASL. The New York Cosmos lost 1-0 and were eliminated. Beckenbauer can look back on an almost flawless career as a player. The Emperor won every title he could win. Now he was looking for a new challenge, which he found a year later – as coach of the German national team.

Due to his performances on the pitch and on the sidelines, Franz Beckenbauer is one of the greatest legends in German football. The following list shows a selection of the titles that the libero collected during his career:

Today, Franz Beckenbauer lives with his family in Salzburg, Austria. In 2006 he married his wife Heidi, with whom he has two children. Beckenbauer has been married three times and has a total of five children.

What is Franz Beckenbauer’s net worth?

The net worth of Franz Beckenbauer is estimated to be around $150 million. However, the former world-class player’s health is not looking too good. Beckenbauer underwent two heart surgeries and suffered a nasty eye infection in 2019.

Santiago Gimenez: The Mexican Star Who Refused To Play For Argentina