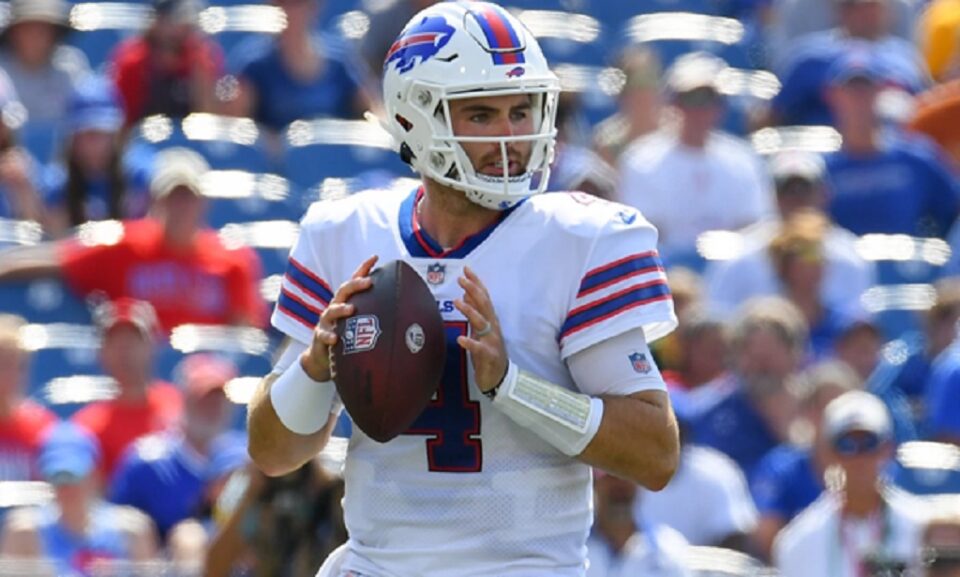 Jake Fromm was one of the top prospects of the 2020 NFL Draft because of his stellar high school and college football career. The Georgia Bulldogs quarterback was picked in the fifth round by the Buffalo Bills to serve as the backup quarterback for superstar Josh Allen. Since he is a backup to one of the top quarterbacks in the NFL, he didn’t get much playing time in his rookie year. Since we don’t have much data to analyze from his rookie NFL season, we are going to talk about Jake Fromm’s career before the NFL. Let’s get started.

When he led Georgia to the National Championship in his rookie year (2017), he was showered with comparisons to Tom Brady. However, he did not have a campaign as good as that (despite the numbers showing otherwise). Likewise, he remained one of the best prospects in the position, although his leveling down did not have him in the top 5 at the time of the draft. In fact, he caused Jacob Eason to transfer to Washington but eventually fell below him in the rankings.

Jake Fromm is a good thrower on deep passes, although he is often inconsistent in these situations, especially when he has to dare to make them. But he is a fairly patient prospect, when he has time in the bag of protection he makes the right decision. Despite being conservative at times, he doesn’t make many mistakes.

When he has to get out of the pocket, he can throw a good pass on the move and has no complications when forced to move. He has a very good touch on pumped passes, especially when they are 25 yards or less. In addition, his speed to get rid of the ball is effective and accurate. One of the reasons he was compared to Tom Brady by some people was because of his ability to release the ball very quickly.

Fromm is accurate in general terms, because he always knows how to take advantage of his receivers to get the play, he can extend it until he finds someone open. When he has to throw over the shoulder of his WRs, he puts the ball exactly where it needs to be, preventing the CB from intercepting it. By throwing strong and direct passes is how he stands out the most.

His confidence, timing, ability to put the ball in tight spaces and the few mistakes he makes make him an exciting prospect to develop. It must be emphasized that there is still a lot to learn, but Jake Fromm is definitely a solid long term project..

Lowering your level throughout your career (which doesn’t make it bad) doesn’t do you any good in terms of potential. In addition, in all the important matches he appeared to shrink a little, unlike the truly great ones who play their best against tougher competition. He tends to depend on the offensive line (Georgia’s offensive line was very talented) and under pressure he’s not the best. Finally, it tends to be conservative.

He led Georgia to winning the SEC Championship in 2017, the year in which he was named the conference Rookie of the Year. A year later, he helped his team win the Rose Bowl.

What was Jake Fromm’s draft projection?

He was expected to be picked up in the second round of the NFL Draft, the lowest he was expected to fall was the third round. However, team requirements often play a big role in player selection so draft position doesn’t always indicate a player’s true calibre.

Which teams were expected to draft Jake Fromm?

Indianapolis Colts. They had the second pick of the second round, and they signed Philip Rivers for one year. He could’ve developed under the veteran in case Jacoby Brissett no longer had a place on the team.

Detroit Lions. They could change faces in the franchise, in an eventual last season of Matthew Stafford as a starter.

Tampa Bay Buccaneers. Tom Brady came to be the starter for the next two years, but he could’ve been the ideal mentor for someone like Fromm.

Eventually, Jake Fromm was drafted by the Buffalo Bills as a backup to quarterback Josh Allen.

What did Jake Fromm say in his racist comments?

After some text messages of Jake Fromm from 2019 mentioning “elite white people” were leaked, there was a furore online. However, the Bills backup QB eventually apologized for his highly insensitive language. Fromm made these comments on the topic of guns, he wrote: “Just make them very expensive so only elite white people can get them haha.”

Betting on Horse Racing- Rules, Tips and Other Information