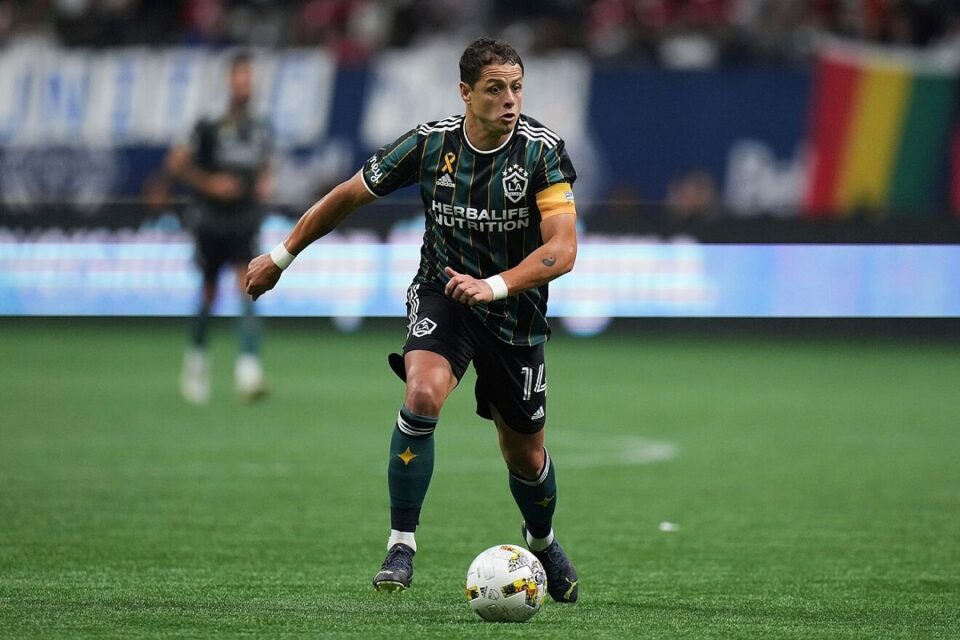 Javier Hernandez is one of the most outstanding soccer players to come out of Mexico in recent years. Chicharito’s game stands out because of his quality and perseverance on the field of play. This has led him to join giant football clubs such as Manchester United and Real Madrid. However, if something has caught the attention of the Mexican in addition to his soccer skills, it is his nickname: Chicharito. It is the same as when he played for Manchester United. He forced the English to call him “Little Pea”. In this post, we will talk about the life and career of Javier Hernandez and also talk about the origins of his popular nickname: Chicaritotell. Let’s get started.

Javier Hernandez: All You Need To Know

Who is Javier Hernandez?

Javier Hernandez was born in Guadalajara, Jalisco, one of the most important cities in the country and home to one of the biggest teams in Mexico: Chivas de Guadalajara, where he made his professional debut after training from the age of 9 in the club’s youth teams.

His father, also called Javier Hernandez (and nicknamed “Chícharo”, hence his son’s nickname) was also a professional soccer player. He mainly played for the Tecos de la UAG, and was on the Mexico squad for the 1986 World Cup, although he had no participation on the field.

His grandfather, Tomas Balcazar, also played for Chivas, where he scored more than 50 goals. He was also a World Cup player, in Switzerland 1954, where he played 2 games and scored 1 goal, against France, an event that 56 years later his grandson was able to repeat, by scoring against the French National team in the 2010 World Cup in South Africa.

When did Javier Hernandez make his professional debut?

The Mexican striker had a long journey in the Chivas youth categories, where he stood out in such a way that he was able to earn the opportunity to debut in the top category in 2006, where he scored the last goal in his team’s 4-0 victory against Necaxa, for which he immediately received the spotlight of the press.

However, the immediate future after his first professional goal was not so remarkable, as it was the only goal in 8 games played between 2006 and 2007.

He had to wait until the 2009 Opening Tournament to stand out and once again catch the eyes of the “Sacred Flock” fans: he scored 11 goals in 17 games and established himself with a starting position as one of the team’s important players.

His great performance with the Chivas “Rayadas” made European teams turn to see the young striker, but it was Manchester United who finally managed to sign the Mexican in April 2010, for a figure close to 10 million dollars, making him one of the most expensive players in the history of Mexican soccer.

How was Javier Hernandez’s stint with Manchester United?

Everything seemed to smile at him on his arrival at the “Red Devils” because from his first preseason game with the team he began to score goals. Just a few weeks later, he won his first official title with the club, beating Chelsea 3-1 in the Community Shield, with Hernandez scoring the Reds’ second goal.

He finished his first season with the English club playing minutes in 45 games and scoring 20 goals, an outstanding figure for the Mexican since he normally came on as a substitute.

His first season was the most regular in general terms, although he maintained a similar average in his following years with the team: In his second season he scored 12 goals in 36 games played; in 2012-2013 he was reflected on the scoreboard 18 times, also in 36 games. His last season was the least effective, as he scored only 9 goals in 35 games.

Despite his low performance, there was a general feeling that Chicharito always deserved more minutes in the field. He finished his spell at United with 59 goals in 157 games and started the 2010/11 UEFA Champions League final against Barcelona, ​​where they failed to win the title.

Javier “Chicharito” Hernández was chosen as Sir Matt Busby’s Player of the Year in 2010/11, an award given by fans to Manchester United’s best player of the year. Other players who have won that award include legends like Cristiano Ronaldo, Wayne Rooney, David De Gea, Robin Van Persie, Ruud Van Nistelrooy, Roy Keane, Ryan Giggs, David Beckham and Eric Cantona.

In addition, he was elected the team’s player of the month on 6 occasions.

How was Javier Hernandez’s stint at Real Madrid?

Even though his last season was the worst in numbers, important teams in Europe had Chicharito in their sights, because within a few minutes he was usually noticed on the scoreboard. One of the interested teams was Real Madrid, and the Mexican did not hesitate to say yes, pack his bags, and put on the shirt of one of the most important and successful teams in the history of football.

Sadly for the man born in Guadalajara, his time with the white team only lasted one season (2014/15) due to the few opportunities he had to show himself. He played 33 games, most of them as a substitute, scoring 9 goals. The most memorable one was against Atletico de Madrid in the quarterfinals of the Champions League, where at minute 88 he scored the winning goal, off a pass from Cristiano Ronaldo.

Despite not having participated on the pitch, Javier was part of the squad that won the FIFA Club World Cup, becoming the third Mexican to do so, after Jonathan Dos Santos and Rafael Marquez (FC Barcelona).

How was Javier Hernandez’ stint with Bayer Leverkusen?

After passing through the ‘merengues’, Hernández signed for the German team Bayer Leverkusen. In his first season with the team, he registered his best goal scoring average since arriving on the old continent (.65 goals per game), scoring 26 goals in 40 games.

For his second season, his goalscoring quota was reduced by 50%, scoring only 13 goals in 36 games, one of the arguments for this being his last year with Bayer.

Finally, ‘Chicharito’ returned to the league where he was best valued, the English Premier League. His signing aroused a lot of interest because this was where he was seen at his best level and where he had left the feeling that he deserved many more opportunities. It seemed that West Ham would be the place where he could prove it.

Contrary to the prediction of many, his first two seasons (2017/18 and 2018/19) with the ‘Hammers’ registered his worst goalscoring record since playing in Europe: 8 goals per season, participating in 33 and 25 games respectively.

Javier Hernandez goes back to Spain

On September 2, 2019, at the close of the European transfer market, it was reported that Javier Hernandez would become the new striker of Sevilla, in a transfer that cost around 8 million.

In his debut in the starting 11 in Seville, Javier “Chicharito ” Hernández gave a sample of all his goalscoring power, Sevilla triumphed over Qarabag in the Europa League by 3-0 with a free kick goal. Also for the Europa League, Chicharito gave Sevilla a 1-0 victory over APOEL on October 3, 2019.

He has played 8 games for the Spanish League, including the defeat against Barcelona, ​​where Sevilla lost 4-0. Despite that, Chicharito’s entry in the 65th minute when the game was already 3-0, managed to unbalance causing two expulsions, Ronald Araujo was sent off in the 87th minute for committing a foul on the attacker while he was escaping alone towards the area. Dembele angrily complained to the referee and also received a red card.

In the season he has played 8 games and scored a solitary goal in the League, his last game was in a 1-1 draw against Osasuna, on December 8, 2019.

Javier Hernandez goes to the USA

On February 29, 2020, Chicharito began his adventure in the United States, starting with a visit to the Houston Dynamo FC and putting together the play that allowed his team to draw.

Soccer resumed in the MLS, the second game on July 13, 2020, his team lost 2-1, at home against Portland Timbers, the solitary LA Galaxy goal was scored by Chicharito.

How has Javier Hernandez performed for the Mexican team?

He was part of the team that was preparing for the 2005 Under 17 World Cup held in Peru and where the ‘Tri’ was crowned for the first time, but he was not called up in the final list, so he did not participate in the championship.

His debut with the senior team was on September 30 in a friendly against Colombia.

His first official participation could not have been in a better setting: the 2010 World Cup in South Africa. And to make it even more significant, a few minutes after coming on as a substitute in Mexico’s second match in the World Cup, against France, Chicharito scored the first goal of the match, in which they finally won 2-0. In this same World Cup, he scored the consolation goal in the round of 16 against Argentina, a match that was 3-1 in favor of the South Americans and that ended up with the elimination of the Aztec team.

In 2011 he was the top scorer in the CONCACAF Gold Cup, the same in which Mexico was crowned champion. He scored 7 goals, which earned him the Golden Boot and the award for the most valuable player in the competition.

In 2014 he played the World Cup in Brazil, where he also scored against Croatia in the group stage, a match that ended 3-1 in favor of the Greens. On May 27, 2017, he became the top scorer for the Mexican team, scoring in the friendly against Croatia and breaking Jared Borgetti’s record of 46 goals.

Javier “Chicharito” Hernández, once again participated in the FIFA World Cup in Russia 2018, where he collaborated with assists in the historic victory of Mexico against Germany, and scored the second goal in the victory against South Korea in the group stage. With this goal against Korea, Javier Hernandez joined Luis “El Matador” Hernández as the top scorer for Mexico in the World Cups (4 goals).

Why is Javier Hernandez called Chicharito?

Everything goes back to a family issue, because his father, Javier Hernandez Gutierrez, who was also a professional soccer player and who was part of the team that played the 1986 World Cup in Mexico with El Tri, was nicknamed by one of his brothers as “Chícharo”. “Because he had green eyes and was short in stature . Once Javier Hernández Balcázar decided to venture into the world of soccer with Chivas, in Mexico he began to be called ” Chicharito “, in honor of his father since he possessed similar soccer skills, although to differentiate them he was given the nickname of chícharito; this is how the story of the famous Chicharito Hernandez arose.