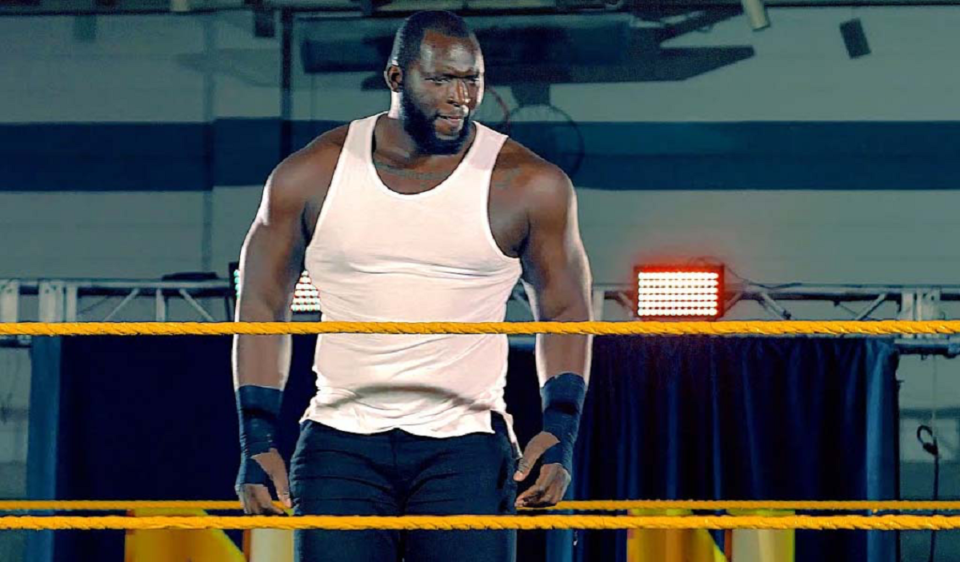 Tolulope Omogbehin who is also known as Jordan Omogbehin is a Nigerian wrestler born in 1994 in Lagos. Since 2018, he has been under contract with the WWE and appears regularly on their show Raw brand under the name Omos. Along with AJ Styles, he was Raw Tag Team Champion.

Jordan Omogbehin: 6 Interesting Things About His Life and Career

On October 17, 2018, it was announced that WWE had signed Jordan Omogbehin as they said they signed a total of seven athletes to train at the WWE Performance Center. Among them was Omogbehin.

On May 10 at Money in the Bank, the 7ft 4 wrestler made a cameo appearance as Akira Tozawa’s Big Ninja.

He has initially on July 18, made his in-ring debut at an NXT Live event, defeating Team 3.0 in a 2 on 1 handicap match. He returned the following month during a home show on August 24 and won a 15-man battle royal.

The 7 footer also battled in his first tag team match with fellow competitors Denzel Dejournette and Tehuti Miles but lost to The Forgotten Sons.

Returning in 2020 during an NXT House Show, the Nigerian teamed up with Bronson Reed to defeat Aleksandar Jaksic and Tehuti Miles.

Jordan Omogbehin then made his debut on the main roster on June 15, 2020, where he was introduced as a member of the ninja faction by Akira Tozawa. After the ninja gimmick, he was used as a bouncer for Raw Underground, which was founded by Shane McMahon at the time.

After RAW Underground ended, he started working with AJ Styles in October 2020 as his anonymous “associate” when Styles returned to the RAW brand.

At the Survivor Series, 2020 Omogbehin was presented with the new ring name Omos. At the Royal Rumble 2021, he eliminated Big E and Rey Mysterio, although he was not involved in the match.

Following the March 15, 2021 episode of Raw, Omos announced that he would make his in-ring debut at WrestleMania 37 alongside Styles against Xavier Woods and The New Day Kofi Kingston for the Raw Tag Team Championship.

On April 10, 2021, he won the Raw Tag Team Championship at WrestleMania 37 together with AJ Styles. For this, they defeated The New Day Kofi Kingston and Xavier Woods. The reign lasted 133 days and lost the title, finally on August 21, 2021, at SummerSlam 2021 to Randy Orton and Riddle.

On July 26, 2021, on an episode of Monday Night Raw, he defeated The Viking Raiders with AJ Styles to retain the Raw Tag Team Championships.

After transferring from the USF, Jordan Omogbehin played basketball for Morgan State University in Baltimore, Maryland under the center position from 2014 to 2015.

In October 2018, it was announced that Omogbehin had signed on to coach for WWE.

As written above, in July 2019, in his first match as a WWE NXT Superstar Jordan Omogbehin defeated Team 3.0. But did you know that at the live event in Lakeland, Florida, he was being managed by Malcolm Bivens?

Before Jordan pinned them both at the same time, he quickly destroyed his two opponents by pressing their skulls down to the mat. This was something WWE Hall of Famer Scott Hall revealed to be impressive, saying he was amazing at how the newcomer had picked up the wrestling business.

According to a post from Instagram, Kevin Nash also had some nice things to say about Jordan Omogbehin in 2019, saying: “I saw this new kid they have down there, Jordan, a big kid about 7’4” about 440 [lbs], just a monster, and I was there for his debut match. I got to produce it. And it’s just that connection. You know how it is when you connect with a guy and when he doesn’t know anything and you teach him something.”

Jordan Omogbehin was born in Lagos, Nigeria and would have continued his life there but his parents decided to migrate to the United States, specifically Virginia.