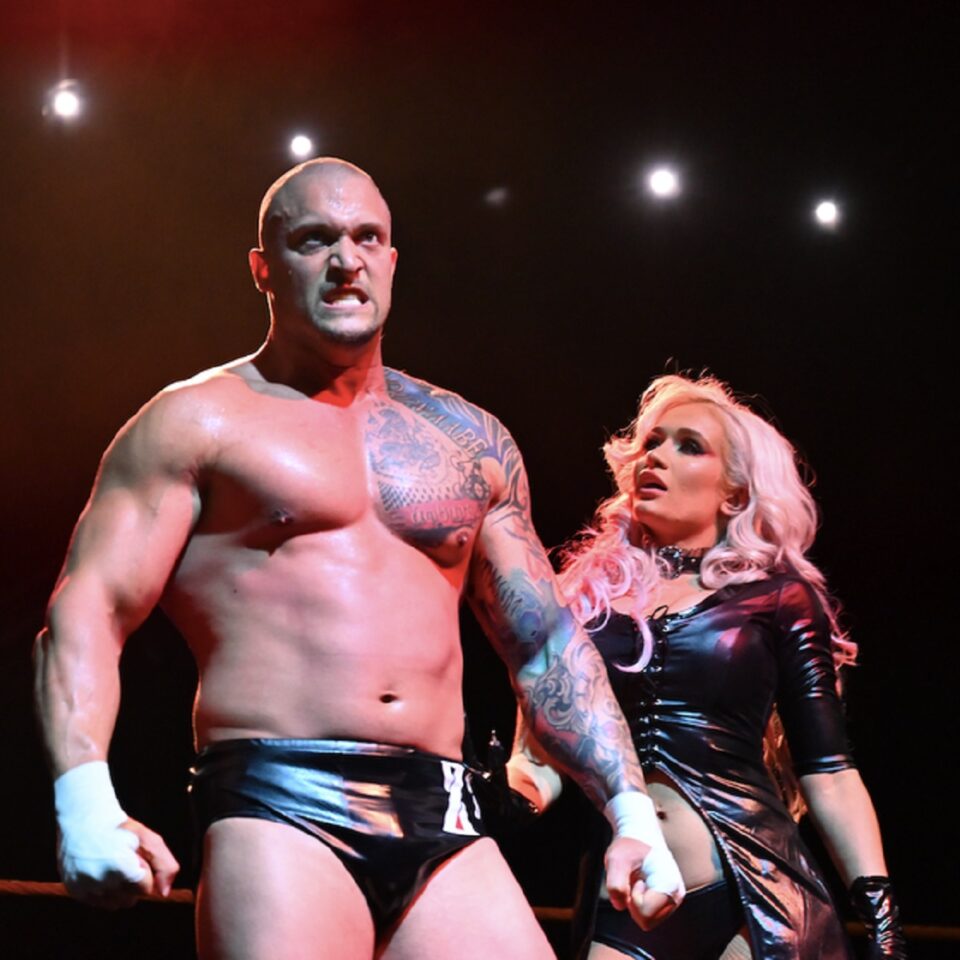 Kevin Kesar is an American wrestler best known for his work on World Wrestling Entertainment under the name Karrion Kross which he changed to Killer Kross while working on the independent circuit, Impact Wrestling, Lucha Libre AAA Worldwide and Major League Wrestling. He debuted in 2014 and in 2015, Kross made his GFW debut for the GFW Amped tapings losing to Bobby Roode in the quarterfinals of the GFW Global Champion tournament. He left the AAA at the end of 2019 and by the near year, in 2020, he signed with WWE and won the NXT Championship after just five months. Here are 6 facts about Kevin Kesar or Karrion Kross’s life that not many people know.

1. Karrion Kross was trained by Glenn Gilberti aka Disco Inferno:

He began his wrestling career in 2014 and was trained by Glenn Gilberti who is now a semi-retired American professional wrestler, best known as Disco Inferno. Glenn Gilberti is best known for his work for WCW from 1995, making his television debut in a win over Scott Armstrong ( Scott James) on September 16 (taped August 21), 1995 “WCW Saturday Night.” He was a midcarder, winning matches over lower-ranked talent but losing to names like Eddie Guerrero and, in his final WCW appearance, Sabu (Terry Brunk). He made his PPV debut in the three-ring 60-man battle royal at “WCW World War 3” in November 1995. In late 1996, he started a storyline boasting about having a great Leglock submission game called Last Dance and would threaten his opponents with it before their matches.

2. His famous NXT promo with Adam Cole was given one night before:

A promo, which at the time had let it appear that there would be tensions between Adam Cole and Karrion Kross. What is certain is that it had the desired effect, leaving viewers and even Karrion Kross speechless.

“I was told that they wanted me to go to the main roster by destroying and crushing everyone. Timelines didn’t allow for that, so they thought, how can we have the best guys in NXT in a match where Kross can go and kill those guys? In this business, you can’t just crush people all month in promos and tag matches and all that and then beat them in a proper pay-per-view fashion. So, I think the whole idea behind it was to let them blow off steam before the pay-per-view and then smash them and beat them. That was basically the idea behind it all. in the promo, Cole needed to look strong and they played with this fourth wall thing and that was it.”

“Regarding this promo, everything Cole said and all the things I said was delegated to us by a writing team, the evening before we had received a script. He is a true professional, it was great working with him and we literally showed up and did our job that day like we would any other day. He was always the type of guy who broke the fourth wall during his promos.”

3. Karrion Kross worked with the Lucha Underground under the name White Rabbit:

It was a sad day with a great list of superstars who had been released from their contracts, one of them was that of the fighter Karrion Kross who had officially been fired from WWE along with many others. WWE had announced that a large list of superstars have been fired, one of the most shocking cases is that of Karrion Kross, he and his fiancee Scarlett Bordeaux have been released from their contracts and are no longer part of the company. They both came to WWE together in NXT and Karrion Kross had a very dominant role during that period winning the NXT championship twice, then he was promoted to the main roster where he continued to be dominant and it was even planned that his character would have a total change, unfortunately it’s all been written off now that he’s been fired just like so many other talents. It is clear that no one has a guaranteed position in the company and despite having plans WWE usually makes drastic decisions, another shocking case is that of Keith Lee who had had a reputation and a new character, B-Fab member of Hit Row, Nia Jax, Ember Moon, and Franky Monet.

5. In December 2019, Kross was released from his contract with Impact:

On the June 14, 2018 episode of Impact, Killer Cross made his debut in a backstage segment posing as a police officer and arresting Petey Williams for being suspected of assaulting wrestlers and staff. However, once in a secluded place backstage, Cross attacked the handcuffed Williams and strangled him, showing himself to be the real attacker. Cross made his in-ring debut on the July 5 episode of Impact, defeating Falla Ba. Two weeks later, Cross defeated Williams after applying a rear naked choke.

On the August 9 episode of Impact, Cross helped Austin Ayres retain the Impact World Championship against Eddie Edwards. The following week, Aries announced Cross as his “insurance policy”. The duo were joined by Moose, who betrayed Edwards during a match on 30 August. At Bound for Glory on October 14, Cross and Moose were defeated by Edwards and Tommy Dreamer. In the main match, Cross and Moose were in Aries’ corner when he lost the Impact World Championship to Johnny Impact.

After his alliance with Aries ended, Cross entered into a storyline with Johnny Impact in which Cross told Impact that he needed him to keep the Impact World Championship for a long time. At Homecoming on January 6, 2019, Cross attacked Impact and his wife Taya Valkyrie. On the January 25 episode of Impact, Cross challenged Impact for the world title, however the match ended in a double disqualification. Then at Impact Wrestling: Uncaged, Cross lost a title match also involving Moose and Brian Cage. In May, Cross entered into a feud with Eddie Edwards after Cross destroyed a shinai given to Edwards by Tommy Dreamer. As a result, they participated in a series of hardcore matches. On 14 June at Impact, Cross defeated Sandman.

On May 13, it was revealed that Cross had asked to be released from Impact Wrestling following contract renegotiations. His question was prompted by issues with his creative control, as well as his current pay-to-speech arrangements. At the time, he was not fired. At Slammiversary XVII, Cross lost a match against Eddie Edwards, where he reportedly refused to make a blade and fake blood was used instead. After this match, he was not announced to participate in television shows in July, August or September, and the parties continued negotiations. It was reported that his contract expires in December, but the company has the option to extend it for another year. In December, Impact Wrestling released Cross from his contract.

6. Karrion Kross reverted to Killer Kross, and rejoined the MLW he left before going to WWE:

His non-competitiveness clause recently ended, as did that of Keith Lee who took over as AEW manager. Killer Kross reunited him with the promotion he left before joining WWE NXT: Major League Wrestling.

Killer Kross, who had just left IMPACT Wrestling at the end of 2019 had signed and made his debut with the promotion in February 2020 by appearing on the MLW Fusion show. Killer Kross made an appearance at Fightland defeating Tom Lawlor by disqualification before winning a tag team match with the Von Erich & Davey Boy Smith Jr. over Dominic Garrini, Erick Stevens, Kit Osbourne & Tom Lawlor.

A few weeks later, Kross joined WWE for NXT along with his girlfriend Scarlett Bordeaux. MLW itself announced the return of Killer Kross for the show MLW SuperFight whose recordings will take place on February 26th.

The ex-Karrion Kross was fired by WWE weeks after his Monday Night RAW debut along with other Superstars and had to abide by a 90-day non-competition clause.