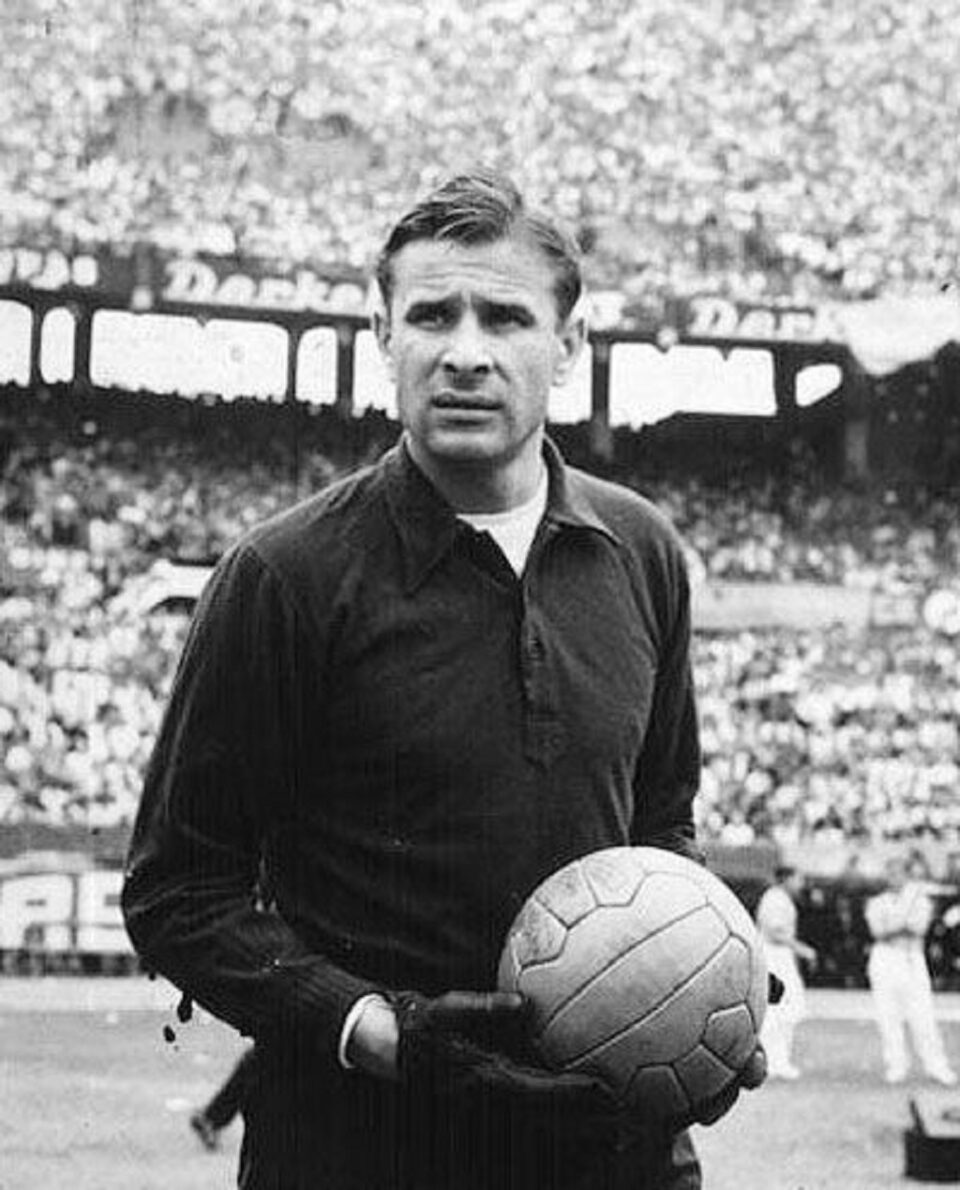 Lev Yashin was the man who completely and forever changed what it meant to be a goalkeeper.

Known as the Black Spider, Yashin was a European champion in 1960 and played in three World Cups between 1958 and 1966. His performance ended up being crucial for the Soviet team’s fourth place in England after losing in the semifinals against Germany and in the so-called consolation match against Portugal. At the club level, he defended only one team, Dynamo Moscow, with which he registered 270 games without conceding a goal of the 326 games he played. That balance made him in 1963, the only goalkeeper in history to be recognized as the European football player of the year, an award that preceded the Ballon d’Or.

1. He was a Soviet footballer with an interesting nickname:

Known internationally as the Black Spider, Lev Yashin is considered one of the best goalkeepers in the history of football; with a great wingspan. He was also very agile and safe under the sticks.

His sober figure, dressed completely in black, gave rise to his nickname as the Black Spider, and contributed to inspire the legends that were later passed down from generation to generation until today.

The ability to predict the attacks of the ‘Black Spider’ adversary left footballers of his time stunned. Precisely those ‘long hands’, together with the black uniform, earned him the nickname of ‘ Black Spider ‘.

One of his most recognizable attributes was his cap. When a play occurred outside the area, he removed his cap before heading the ball to the delight of the public.

The only goalkeeper in history to receive the Ballon d’Or was born on October 22, 1929, in Moscow (he died on March 20, 1990). His parents were blue-collar workers and Yashin spent much of his childhood on the streets playing sports.

In the summer he played soccer with the other children until the evening, while during the winter they engaged in ice hockey, since, in the cold, the soccer field in his neighborhood became an ice rink on its own. Ice hockey is another sport where Lev Yashin could become a legend, but soccer turned out to be his true destiny.

“My secret? Before a game I smoked a cigarette to calm my nerves and sunk a nice vodka to tone my muscles.”

4. Lev Yashin got into football while working as a mechanic:

He began his sporting life playing ice hockey as a goalkeeper when he worked as a mechanic in an aircraft factory.

Since he came from a family of industrial workers, when he was 12, World War II forced him to work in a factory to support the war effort.

However his mental health at the age of 18, after suffering from a nervous breakdown, meant he was unable to work. He was then shipped off to work in a military factory in Moscow where he was, fortunately, spotted playing for the factory team to join the Dynamo Moscow youth team.

In fact, early in his career, Yashin had to choose between hockey and soccer. He eventually turned to soccer, but he also had time to excel in ice hockey. Thus, in 1953 he won the USSR Hockey Cup and received the bronze medal at the national championship.

5. In 1950 he joined the Dynamo Moscow youth football club:

At first, the goalkeeper had serious difficulties when blocking balls and it was extremely difficult for him to become part of the main team of Dynamo Moscow.

After two unsuccessful attempts, in 1950 he was sent to the second division team, where he spent three seasons. There, the young footballer began to suspect that his career could end without even starting.

Despite this, he devoted himself to training like never before. Many athletes like Mike Tyson have stated before that talent can only take you so far and that training and discipline are more important.

Lev Yashin’s sweat and efforts paid off: in May 1953 he was given a new opportunity – playing for a senior match. On this occasion, the goalkeeper was fully prepared to start at Dynamo, both morally and physically.

Already in the first team of the Moscow team, Lev Yashin was called up to the Soviet national team and would go on to gather 78 caps.

With the national team, he won the 1956 Summer Olympics and stood out for a particular style when it came to protecting the goal. He was one of the first goalkeepers in the world without the fear of leaving the area and correcting the mistakes of his teammates.

Another aspect that was special about Yashin was his ability to ‘read’ the game, which is why he anticipated the actions of his opponents and was ahead of them. Thus, it seemed that his hands were longer than they really were.

Yashin regained national popularity and with Dynamo Moscow, he would become a USSR champion and win the Cup twice more. He also won the silver medal in the 1964 Eurocup, as well as the bronze medal in the London World Cup in 1966.

8. The 1958 World Cup in Sweden, placed Yashin on the map for his prowess:

With his performance, Lev Yashin raised expectations to the limit and could not meet them at the 1962 World Cup in Chile. Unexpectedly, the team lost in the quarterfinals. Yashin was blamed for conceding two important goals that precipitated the team’s defeat. The number 1 of the national team was blamed for the failure and, upon returning to the USSR, was the subject of harsh criticism, both from journalists and fans.

The footballer decided to take a break after succumbing to the pressure and retired to a distant town. But he was unable to live without football, so it didn’t take long for him to return to Dynamo Moscow.

10. The legendary Ballon d’Or (he was the only goalkeeper to receive this acclaimed award):

While in his native Yashin he had to face a negative attitude after the World Cup, outside the town, his talents were deservedly appreciated. He was invited to play a match dedicated to the centenary of football at Wembley, where a team from the United Kingdom faced a world team. Although at first, it was a friendly match, the best players in the world met on the field, who under no circumstances wanted to lose.

The Soviet’s spectacular form impressed Europeans and journalists from the prestigious France Futbol media, who recognized him as the best player of the year and awarded him the prized Ballon d’Or. To date, he is the only one European goalkeeper to have achieved that award.

He defended the goal of the FIFA national team three times and retired from football in 1971, aged 41.

He played 326 games with Dynamo Moscow and 78 with the Soviet national team, in which he saved 100 penalties, his great specialty.

Yashin reached the rank of colonel in the Soviet Army and was awarded the Red Flag and Lenin Orders. He was appointed a member of the USSR State Committee for Sport, and obtained a high school diploma from the Central Committee of the Communist Party of the Soviet Union (CPSU). When he left active soccer, he was a coach of youth teams and a Physical Education teacher.

On March 20, 1990, Yashin passed away from stomach cancer in Moscow.

His memory would never be lost in Russia As Moscow authorities decided to raise a statue to the legendary Russian footballer, considering him one of the best of all time.

13. Honored in the official poster of the 2018 World Cup in Russia:

As for Yashin, he became a crucial figure in Soviet football. Lev Yashin was chosen to defend the USSR at the 1956 Olympics in Melbourne and this decision proved unbeatable. In five games he only conceded two goals. In the final against Yugoslavia, he made more than 10 saves and left the goal to zero.

The USSR won the gold medal. The next international tournament where Yashin excelled was the Eurocup in France in 1960. Thanks to his brilliant performances, the Soviet team won the only Eurocup in its history.

Yashin was never considered the best, a title he dedicated to the Yugoslav Vladimir Beara, but his performance goes beyond the field of play, to the point that it still remains in force almost three decades after his death. In Russia, despite the political changes experienced by the former Soviet Union, for all the republics that emerged from that federation Lev Yashin would always be a point of sports union.