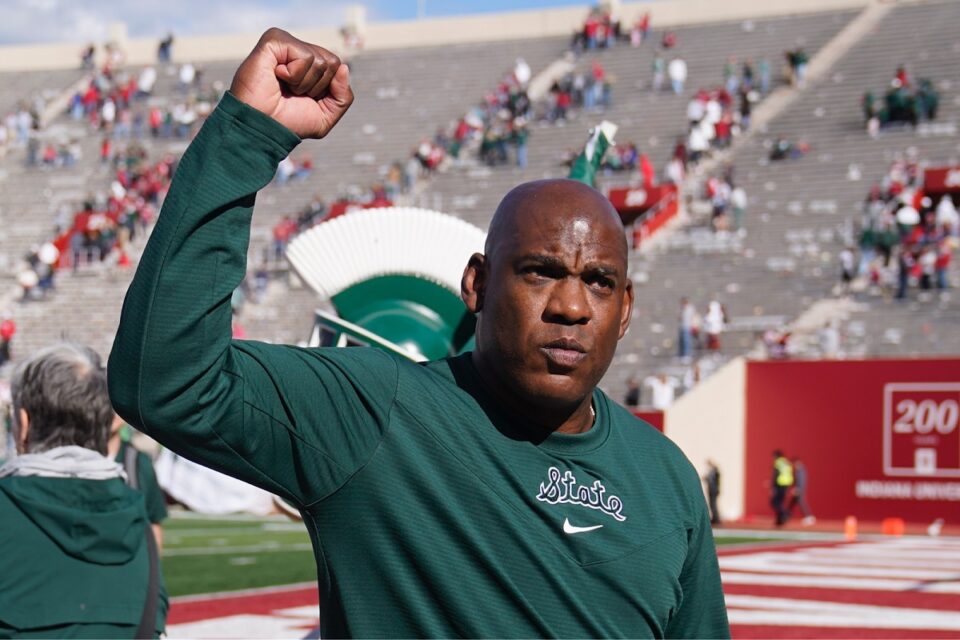 American football coach and former player Mel Tucker’s massive contract extension is fully guaranteed with the buyout unchanged. Essentially, Mel Tucker’s successful career leading Michigan State to a resurgent season made him one of the wealthiest coaches in the country of America leading the university to sign Tucker to a $95 million, 10-year contract extension.

Mel Tucker Is Now One Of The Richest HC In College!

Mel Tucker is poised to become one of the highest paid coaches in the college and even rise to the top in the sport. The former football player is achieving a historic season at the helm of Michigan State, setting a record that a university as prestigious as the Spartans has not reached for a long time. The American football coach is also so incredibly valued by the directors of the university that he would go on to sign a new 10-year, $ 95 million contract to continue being the Michigan State coach.

Some reasons for the new contract:

When Mike Dantonio retired from football, Tucker arrived in the 2020 offseason, leaving open the vacancy at the Head Coach position with the Spartans. Mel Tucker had barely had a little coaching experience before, as 2019 was his first year managing a team, which was the Colorado Buffaloes, who finished the season with a 5-7 record and getting the transfer of one of the best recruits of the recruiting class of 2018, Antonio Alfano.

The now Michigan State coach did not miss the opportunity and, in a surprising move, left office in Colorado after just one year to go to a great program like Michigan State. It should be clarified that beyond having a year of experience as HC, Tucker was an assistant to coaches such as Nick Saban, Kirby Smart, and Jack Del Rio in previous years, so he came with good references, to say the least!

After 2020 where the record was not extremely positive, the first roots were set for the Spartans fans to be excited: they had beaten Michigan in what is one of the historical rivalries of the college and had improved in recruiting within the State of Michigan. These two points were key for Tucker to have his place secured for 2021, which ended up being the year where the team ended up giving the surprise and to this day continues to fight for a place in both the Big Ten conference final. as for the College Playoffs.

One of the great reasons for this renewal is the interest that there was on the part of other universities in the coach since it must be remembered that these season vacancies were opened in very prestigious universities and, despite not having the best present, they are one of the most important in college for their history.

But in this case, we are talking specifically about LSU, since as soon as Ed Orgeron, current coach, announced that he was not going to return in 2022, the main recruit assigned to occupy that position next season was Mel Tucker.

But those from Michigan did not want to lose a man who seemed to be the one to take the university to the top of the sport and turn them back into a team that is competitive year after year, that’s why this renewal and, above all, great payment.

With a 10-year, $ 95 million contract, with an annual salary of $9.5 million, Tucker will become the second-highest-paid coach annually in the college – with a salary pool for the 10 on-field assistants that will increase from $6 million a year to “at least” $7.5 million.

He becomes the second-highest-paid coach annually trailing only Nick Saban, who annually earns a salary of $9.75 million. In addition, the amount of 10 years is the maximum for any HC, since that length of years we only see in consecrated coaches within a program such as Saban, Swinney and Jimbo Fisher.

With a 10-year, $ 95 million contract, Tucker’s bonuses include:

What is relevant on the subject of the contract is that Mel Tucker became the highest-paid African-American coach of all sports in the United States, both in terms of the number of years, total money received as well as annual salary. It is a historical mark for African-American coaches that for some years now the leagues have been seeking to be included more within the considerations for important positions in the franchises within the different sports in the United States.

Finally, some details of note from Tucker’s new contract include doubling his figure in his original contract such as the bonuses for reaching the Big Ten championship and winning it. The American football coach gets the coach of the year bonuses which are unchanged from Tucker’s original contract, (a bonus of $375,000 for winning the national championship). Please note that the new deal takes into account the potential for CFP expansion.