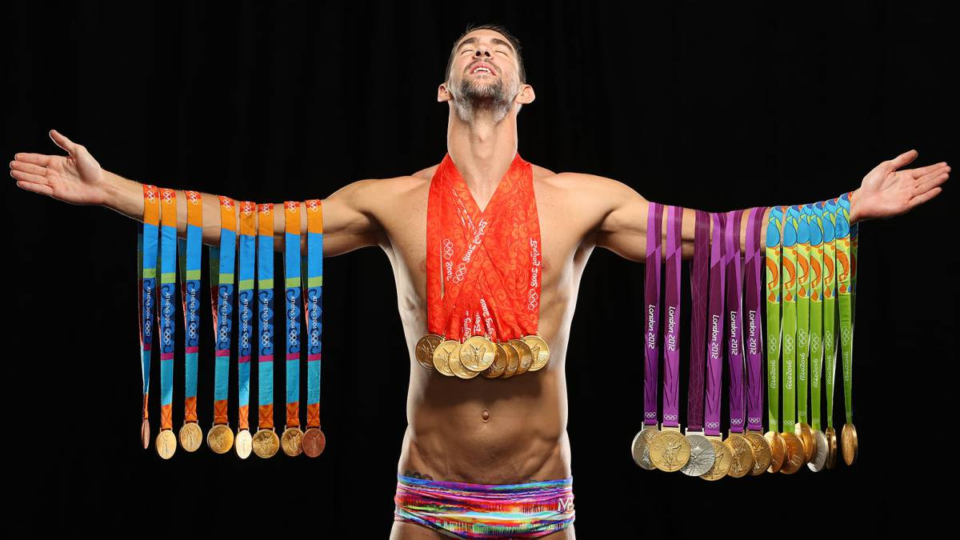 Michael Phelps is a legendary American swimmer who is the most successful Olympic athlete of all time. He has amassed a massive tally of medals in his career. As a matter of fact, he has won more gold medals than 66 countries. Michael Phelps is also the first ever male swimmer to compete in five different Olympic games. Over the course of his career, he has won a lot of medals and earned a lot of money. In this post, we will find out about his net worth and some other interesting aspects of his life and career. Let’s get started.

Michael Phelps won a staggering 28 Olympic medals (23 Gold) during his career. He competed in the Summer Olympic Games in Sydney, Athens, Beijing, London, and Rio and collected 23 gold, three silver, and two bronze medals (he didn’t win any medals during the 2000 Sydney Olympics). Phelps retired after the 2016 Rio Olympics, where he won one silver and five gold medals. This also helped him become the oldest individual gold medalist in the history of Olympic swimming. Phelps was also the first swimmer to win four consecutive golds in the same event, the individual 200-meter medley. Phelps has set 39 world records, which is the most of any athlete of all time.

What is Michael Phelps’ Net Worth?

As the most decorated Olympian of all time, Phelps’s net worth is estimated to be around $60 million.

As of 2018, the U.S. Olympic committee awards medal winners $ 37,500 for gold, $ 22,500 for silver, and $ 15,000 for bronze. Phelps’ record number of medals has earned him more than any other American Olympian, but most of his net worth comes from endorsements, sponsorships and paid appearances.

Financial details for most of the deals have not been disclosed, but his deal with Under Armor deal is estimated to be in the $5 million range. In late 2015, Phelps also agreed to be the spokesperson for 800razors.com, a deal rumored to include ownership of a “significant amount” of the company.

After Michael Phelps shattered Mark Spitz’s record of seven gold medals in a single Olympic game, he was awarded a $1 million bonus. He distributed all of that to different charities through his Michael Phelps Foundation. This $1 million is not included as part of Phelps’s net worth, but is an example of how much some companies pay the swimmer.

What are some of Michael Phelps’ endorsements and sponsorship agreements?

Michael Phelps’ performance as a 15-year-old at the 2000 Summer Olympics caught the attention of the public. However, it was during the 2004 Athens Olympics when Michael Phelps emerged as a true superstar. He won six gold medals and two bronze medals. However, he missed out on equalling Mark Spitz’s record of seven gold medals in a single Olympic Games. After that, a flurry of sponsorships and endorsements arrived. Four years later, Michael Phelps reached his peak and won eight gold medals during the Beijing Olympics, breaking the long standing record of Mark Spitz.

Since then, Phelps has partnered with large corporations such as Visa, Metro, Wheaties and Louis Vuitton. The most recent endorsements have been with Under Armor, Omega, Master Spas, Sol Republic Headphones and Aqua Sphere.

With a total net worth of over $60 million, there is no question that Michael Phelps leads a luxurious life. Spend millions of dollars on luxury cars, homes, charity, and vacations.

However, this celebrated swimmer does not have to spend a lot of money because he has numerous sponsorships and endorsements that cover his expenses.

Michael Phelps has an expensive lifestyle. He wears Seamaster Planet Ocean 600M Watch with his ‘MICHAEL PHELPS Limited Edition’. Also, this watch was made to honor Michael Phelps and his career.

What does Michael Phelps do in his holidays?

Phelps has undoubtedly visited various countries around the world as he has to travel to different countries for tournaments. However, when Michael is not working or is free, he loves spending time with his family and going on vacation.

Michael loves to go to exotic places like Greece, Italy, Maldives, Bali, etc. These are the places with great views, beauty, seas and beaches. It’s no wonder someone would love to spend time in quiet and peaceful places, away from crowds and noise, just like Phelps.

However, in 2019 images of Phelps in the Maldives went viral and became the talk of the town. By looking at the photos, one could easily see that Phelps was enjoying his vacation as he was seen playing volleyball, spending quality time with his family, and sunbathing.

Growing up in high school, I wasn’t hanging out with friends every day or on the weekends. Doing normal high school kid things was something I was willing to give up.

I think that everything is possible as long as you put your mind to it and you put the work and time into it. I think your mind really controls everything.

Even in high school, I’d tell my mom I was sick of swimming and wanted to try to play golf. She wasn’t too happy. She’d say, ‘Think about this.’ And I’d always end up getting back in the pool.

I learned how fast you can go from being an international hero to being a reference in a joke on a late night talk show.

I have the opportunity to be part of swimming history. To take the sport to a new level would be an honor for me. There’s no better time to try this than now.

Once I’m already in my room, I still have to open a door to get into my bed. It’s like a giant box. It’s like the boy in a bubble.

This is my 20th year in the sport. I’ve known swimming and that’s it. I don’t want to swim past age 30; if I continue after this Olympics, and come back in 2016, I’ll be 31. I’m looking forward to being able to see the other side of the fence.

Which charities is Michael Phelps involved with?

Besides being a good athlete, Michael Phelps is a generous person. He has been helping people in need as much as he can. Since Michael Phelps has a net worth of over $60 million, donating some money is no big deal.

Michael Phelps is the founder of the Michael Phelps Foundation. However, this foundation focuses on growing, swimming and promoting a healthy and active life. In addition, this program is specially developed so that young children know the importance of a healthy life and exercise from a very early age.

Other than that, Michael Phelps has openly supported and raised funds for BID 2 BEAT AIDS, the Boys and Girls Club of America, the Make-A-Wish Foundation, and many more.

In 2008 Michael donated $1 million of his prize money to charity. In fact, this is the kindest and most selfless thing that most people might not be able to do.

What are some of the investments made by Michael Phelps?

Since his retirement, Phelps has been investing in few software-related technology projects. However, as he is new to this, he has been treading cautiously. Michael Phelps’ net worth of $60 million is expected to rise with his investments.