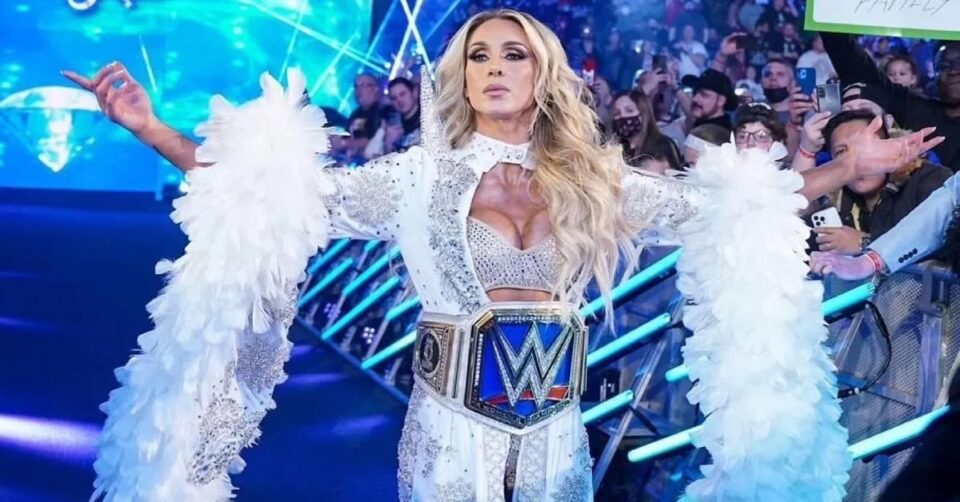 Born Ashley Elizabeth Fliehr, a college volleyball star, Charlotte Flair takes her first name from the city where she was born, Charlotte in North Carolina, and her stage surname comes from the name of her father, the “Nature Boy” Ric Flair. Charlotte Flair spearheaded the Divas’ Revolution and took women’s wrestling to new levels. Charlotte Flair and Sasha Banks also hold the honour of being the first two women to main event a WWE pay-per-view. Over her career, Charlotte Flair has become one of the most decorated WWE performers of all time. She has the perfect combination of great physical abilities, good looks and mic skills, making her the complete package. She is big, strong and agile, equally adept at performing strength-dependent grappling moves, and off the rope athletic moves. A post talking about all her achievements will take up our entire server space, so we will take a quick look into her life and career so far. Let’s get started.

Charlotte Flair: The Queen Of WWE

How did Charlotte Flair get started with the WWE?

Charlotte Flair signed with WWE in 2012 and began training with Florida Championship Wrestling, the federation’s academy. She then started on the NXT side and appeared on television for the first time on July 17, 2013 alongside her father. During this first show, she beat Bayley who had arrived a few months before and was a huge fan favourite. On May 29, 2014, Charlotte Flair became the NXT Champion by winning the finals of the tournament held to define the new champion against Natalya. She went on to lose her title nine months later, against Sasha Banks.

When did Charlotte Flair start on the main WWE roster?

Charlotte Flair debuted in the main roster at WWE RAW on July 13, 2015, teaming with Becky Lynch & Paige. In September, at Night of Champions, she won the title of Divas Champion by defeating Nikki Bella. She will retain this title at Hell in a Cell facing the same opponent, then at Survivor Series and TLC by beating Paige, then at Royal Rumble against Becky Lynch, and finally at Fastlane by beating Brie Bella by submission.

How was Charlotte Flair’s first Wrestlemania?

Wrestlemania 32 then arrives. We are April 3, 2016, Charlotte, who is still champion, must face Becky Lynch and Sasha Banks. On the occasion of the biggest show of the year, the WWE RAW Women’s Championship was inaugurated by Lita and replaced the Divas Title. Flair defeated her two opponents and remained champion. As a result of that, Charlotte Flair also holds the distinction of being the last ever Divas Champion and the first ever RAW Women’s champion. She finally lost this title on July 25, 2016, against Sasha Banks. However, she re-captured the belt a month later and became a two time WWE Raw Women’s Champion. She went on to get involved in numerous feuds in the months that followed with losses of titles and victories in particular against Banks and Bayley. Charlotte Flair’s feud with Sasha Banks was one of the most exciting feuds in WWE at that time. After a record 16 wins, she experienced her first solo defeat in Pay Per View.

How was Charlotte Flair in Smackdown?

On April 11, 2017, during the Superstar Shake-Up, Charlotte Flair found herself transferred to Smackdown. She participated in the first Woman’s Money in the Bank Ladder Match in June but did not win the briefcase. Carmella wins the latter. On November 14, she won the Smackdown Women’s Championship for the first time in her career by knocking out Natalya with a submission hold. She would end Asuka’s unbeaten streak in WWE, defeating her on October 28. Charlotte Flair went on several failed attempts to regain the title.

How was Charlotte Flair’s return to Raw?

In March 2019, Charlotte Flair managed to defeat Asuka by submission to win the Smackdown Women’s Championship for the third time. She went on to lose it two weeks later at Wrestlemania 35 where she faced the champion of RAW, Ronda Rousey and Becky Lynch. It is the latter who left with the two belts and went on to become “ Becky two belts ”.

On May 19 at Money in the Bank, Charlotte Flair recovered her title but managed to hold on to it for just a few minutes as Bayley cashed her Money in The Bank contract to beat her. Several months later, at Hell in a Cell, Charlotte Flair defeated Bayley and became champion again. But that would be short-lived as a week later, Bayley came to Smackdown with a new look, a new attitude, no more hugs and “Bayley buddies”, and reclaimed the title. Three days later, Charlotte was drafted to WWE RAW.

How did Charlotte Flair win the NXT Title again?

On January 26, 2020, at Royal Rumble, Charlotte Flair won her first women’s Royal Rumble by eliminating Bianca Belair, Kelly Kelly, Sarah Logan, and Shayna Baszler. She appeared at NXT TakeOver: Portland on February 17 taking on NXT Women’s Champion Rhea Ripley. She would choose the latter to face her at Wrestlemania 36. She will therefore become NXT champion for the second time in her career during the biggest show of the year. She lost this title at NXT TakeOver: in Your House in June against Io Shirai who is still the current champion. She suffered an injury a few days later, which sidelined her for several months.

How did Charlotte Flair win her Grand Slam?

After more than six months of absence, Charlotte made her return on December 20 at TLCbeing Asuka’s mystery partner. The two women become the new women’s tag team champions by defeating Shayna Baszler & Nia Jax. With this new title, Flair then becomes the 5th Triple Crown Women’s Champion and the 4th Grand Slam Women’s Champion of WWE. Charlotte & Asuka kept these belts until January 31, 2021, when they lost them to the former champions, thanks to the distraction of Lacey Evans & Ric Flair.

The same evening, she participated in the Royal Rumble entering in 15th position, she eliminated Peyton Royce then was eliminated in turn by Bianca Belair, the winner of this battle. Last, at WWE RAW, she announced that she wanted to face Asuka at Wrestlemania 37 for the RAW Women’s Championship. The match ended up being a triple threat with Rhea Ripley in the fray as well. Ripley went on to win the match and the Raw Women’s Championship.

Since 2014, Pro Wrestling Illustrated has ranked Charlotte Flair in the top 10. She was once first in 2016, and twice second in 2017 and 2019. She is also the first woman in WWE history to have participated in the Main Event of RAW, Smackdown and a Pay Per View. Charlotte Flair is a true queen of professional wrestling.

Facts about Allison Stokke: A professional Athlete and a Fitness Model