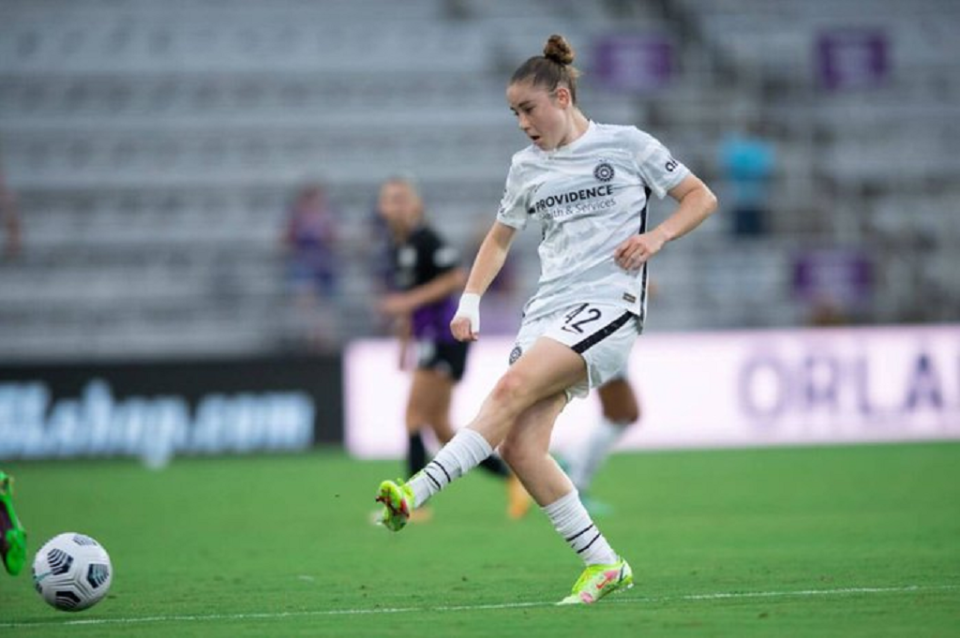 Her name may not be familiar to you yet, but Olivia Moultrie will be a name that will rule the soccer world in the future. From a young phenom to a professional player in the National Women’s Soccer League (NWSL), Olivia Moultrie has achieved a lot at the young age of 15. So what has Olivia Moultrie achieved so quickly in her young life? Let’s find out.

How did Olivia Moultrie start her soccer career?

Olivia Moultrie has been breaking barriers in women’s football for quite some time. At just 11 years old, Moultrie earned a college scholarship to play in Division I with the University of North Carolina.

At age 13, Moultrie joined the lower ranks of the Portland Thorns, signed with one of the great American sports agencies and signed a nine-year contract with Nike, becoming the youngest player to sign with the brand from Oregon, her home state.

For two years, Olivia has been one of the Thorns’ first team training sessions, even playing in preseason games. It was a matter of time before the young midfielder wanted to make the final leap to professionalism, but a major legal pitfall stood between her and her dream of making her National Women’s Soccer League (NWSL) debut.

What happened during Olivia Moultrie’s lawsuit against the NSWL?

The NWSL is, so far, the only professional league that has a regulation that stipulates that players must be at least 18 years old to sign a professional contract and, therefore, play official league matches. Moultrie, born in 2005, did not meet that requirement.

In May, Olivia Moultrie sued the NWSL to overturn the regulations. She was granted a temporary restraining order on June 17. The judge agreed with Moultrie, claiming that the men’s counterpart league, the MSL, had no age restrictions.

Although the league appealed the ruling, the judge’s preliminary ruling prohibited the NWSL from enforcing its age rule to prevent her from signing a contract.

Soon, that contract became a reality and Olivia signed with Portland Thorns for three years. In order to get her rights, Portland Thorns had to reach an agreement with OL Reign, a team that had previously acquired the rights to the player as the first team on the NWSL Discovery list. The two teams reached a deal whereby the Thorns would keep the rights to the player in exchange for a third-round pick in the 2022 NWSL draft.

Just two days after signing her first professional contract, Olivia became the youngest player in league history when she made her debut for the Portland Thorns at just 15 years old. Until then, Ellie Carpenter was the player who held the record, debuting at 18, coincidentally, also with the Thorns.

It was the 84th minute in the game against Racing Louisville at Lynn Family Stadium and the fourth referee, Emma Richards, showed on the blackboard the numbers for the change in the Thorns ranks. Number 36, Angela Salem came out and Number 42, Olivia Moultrie went on the field. Seconds later, she had her first touch of the ball as a professional.

The rest of the game passed without complications, with a score in favor of the Thorns (they won 2-0). During her eight minutes in the game, Moultrie made smart passes, tried to pressure opponents, and made the most of the action in the offensive midfield. It was for a limited time, but Moultrie was already a part of NWSL history.

What did Olivia Moultrie and her coach say about her debut?

“I was so excited that the debut could happen tonight and that I could get going and get on the field ,” Moultrie told reporters after the game. She also spoke about the opportunities she could have over the next six weeks, with five of the usual ones from the Thorns’ calls at the Tokyo Olympics.

“With these games to come, I just hope I can continue to show my worth in training, do my job well and play more minutes,” she explained.

For the moment, it’s best to focus on the context or what made this night historic for the world of women’s football. Olivia Moultrie is now not only the youngest player in NWSL history, but she is the youngest by a wide margin.

For Moultrie, it is not only an achievement to have her first minutes so early, but it is a reflection of all her work, effort and dedication. Moultrie started training with the Thorns at 13 only.

What does the future hold for Olivia Moultrie?

In the midst of all the soap opera surrounding Moultrie’s first professional contract (the legal battle, the deal with OL Reign to stay with the Thorns), people were left speculating on the level of the player. All they knew was that she was 15 years old. She had been in the public eye for years, but the lack of information generated speculation and doubts about her football quality.

Now is the time for the rest of the world to see it. Is Olivia Moultrie the future or just a promising young player who wouldn’t be able to perform at the professional level? Will she be able to stand out and dazzle us now or is there even more? We don’t know yet, but we know for sure that she has already made history. Moultrie is the youngest player in NWSL history right now. And from now on we can focus on what she does on the field.