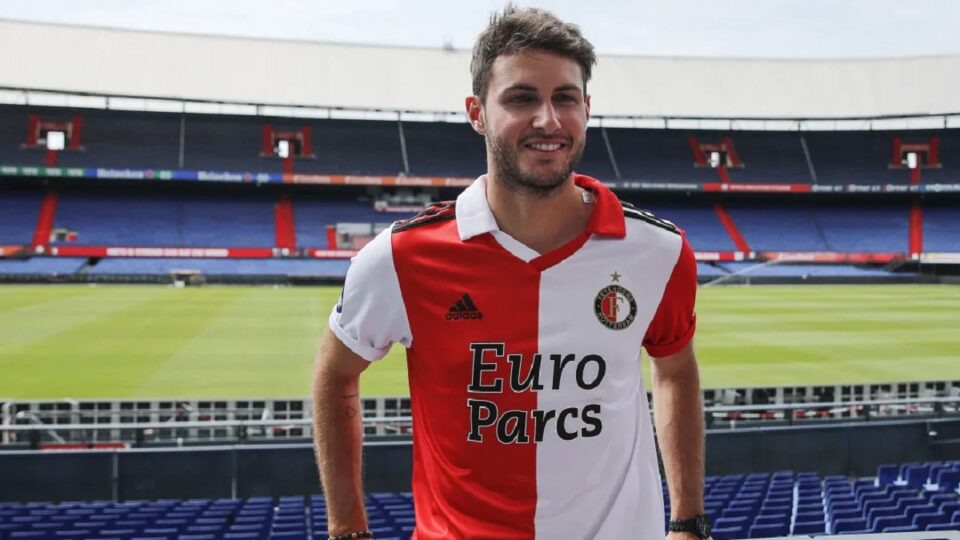 When it comes to the world of football, very few teams have the pedigree and the mystique that surrounds the Argentinian football team. The Albicelestes have featured some of the greatest football players of all time and have been strong contenders at numerous World Cups (winning on two occasions). Very few players will choose to decline to play for a team with such prestige.  However, Santiago Gimenez was one of those young people who, despite being born in the Argentine territory and being considered by a coach like Fernando Batista, listened to his heart and ended up choosing the Mexican National Team as his first option. Now, the ‘Chaquito’, as he is known in the world of football, is experiencing a career peak with Dutch powerhouse Feyenoord. Santiago Gimenez will hope to perform very well with Feyenoord and perform well with the Mexican National Team in the 2022 World Cup in Qatar as well. In this post, we will find out more about Santiago Gimenez. Let’s get started.

Santiago Gimenez: All You Need To Know

Who is Santiago Gimenez?

The life of Santiago Gimenez began in Argentina. However, since his birth, the ‘Bebote’ already felt the colors of Cruz Azul. He was raised for the first few months as a fan of Boca Juniors, since his father, Christian Gimenez, played for ‘Xeneize’. On June 20, 2001, “Chaco” celebrated the title of that Copa Libertadores, the same one in which “Maquina” fell on penalties at La Bombonera. At that time, ‘Santi’ was two months and two days old.

During his childhood, he was dressed in jerseys of different teams. Union of Santa Fe, Veracruz, Pachuca and even America. Despite this, no color and history seduced him more than that of Cruz Azul, where his father stood out at a high level with the aim of achieving a league title, which never came.

How did Santiago Gimenez fulfill his childhood dream?

When his father arrived at the ‘Cement Machine’, in 2010, Santiago was just nine years old. At that time, the sky-blue team had completed 13 years without winning the Liga MX title, but that passion that his father and his biggest idol put in him for the next seven years, managed to turn him into one more fan of the club, himself with those who ended up training as a footballer.

One of the moments that most marked that passion was when, as a ball retriever, he delayed the resumption of a match, which is why he ended up being sent off in a league match, still at the Blue Stadium. “He is the son of ‘Chaco’”, he was heard from the stands, for which a section of fans applauded him.

How was Santiago Gimenez’s youth career?

After standing out in the team’s youth team, “Chaco’s” dream came true on June 16, 2016. In a friendly match against Pumas, in Houston, Santiago debuted at the age of 15, playing 15 minutes, with the number 349. In that match, he caused a penalty, which his father charged and missed. Still, the moment was very special for both of them.

However, all those tears that Christian shed, in each of the failed attempts to make Cruz Azul a champion, turned into tears of happiness and pride when he saw his son for the first time as a starter in the ‘Maquina’, in a game where he scored a goal and even more so when he won the long-awaited ninth league title. ” You saw that it wasn’t that difficult, ” his father told ‘Bebote’ between the festivities.

How did Santiago Gimenez make the Mexican national team?

As expected, his good performances led him to be observed by different coaches. One of them was Fernando Batista, who at that time directed the Argentina Under-23 National Team. Despite the great interest of the ‘Albiceleste’, Santiago Giménez decided to reject the invitation and chose to wait for the call from Mexico.

It should be noted that the ‘Chaquito’, until then, had chosen to represent Mexico and at 19 years old, was very close to being part of the ‘Tricolor’ roster for the Concacaf Pre-Olympic. Likewise, he had already been summoned by Gerardo Martino in a friendly match against Guatemala in October 2020.

How did Santiago Gimenez score his first goal for Feyenoord?

After breaking into the Eredivisie and after a brief period of adaptation, Santiago Gimenez managed to prolong the scoring streak of the season that he achieved at Cruz Azul. And in his second league match against Emmen, Bebote came on as a substitute and was the architect of the second of the four goals in favor of Feyenoord, thus scoring his first goal in Europe.

While that might have been his first goal in the league, he actually went on to score five more over the season. It should be noted that, of the 408 minutes he played with the ‘Machine’ in the 2022 Opening Tournament, he recorded five goals to his name, becoming the leader in the field for several games and thus demonstrating his excellent footballing form.

What are some of the statistical achievements of Santiago Gimenez?

One of the novelties in the list that Gerardo Martino announced this Wednesday was the inclusion of Santiago Gimenez for the first time to be part of the Mexican team. The young 19-year-old striker enjoyed the best moment of his brief football career, since he had the confidence of the Cruz Azul coach, Robert Dante Siboldi, with whom he has served as a starter.

‘Chaquito’ has played a total of 511 minutes with Cruz Azul, achieving three goals (against León, San Luis, and Tijuana) and two assists so far.

This regularity had already been developing since Clausura 2020, a tournament that was canceled on matchday 10 due to the coronavirus pandemic. There, Santiago Gimenez had played over 540 minutes, spread over nine games, getting two goals and one assist.

In total, Giménez has played 23 games with La Maquina since his debut with the first team in Copa MX (2017) and his first opportunity in Liga MX, which came on matchday 7 of the 2019 Season against Xolos.

Santiago’s father, Christian ‘Chaco’ Gimenez, also had his chance to play for the Mexican national team.

After obtaining the Mexican passport and thanks to the fact that he did not make his debut in the Argentine team when he was called up by Maradona in 2009, Chaco played a total of five games with the green: a friendly against the Ivory Coast and the qualifying duels towards the World Cup Brazil 2014 against Honduras, United States, Panama and Costa Rica. Despite having had a brief stint with the national team, Christian saw three different coaches parade through the green bench: Jose Manuel ‘Chepo’ de la Torre, Luis Fernando Tena and Víctor Manuel Vucetich.

The loss against Honduras at the Azteca Stadium shattered Chaco’s position with the Tricolor and for the duel against the United States, the team was led by his assistant Luis Fernando Tena. To rescue the tie, Vucetich arrived, with whom Mexico achieved a hard fought victory against Panama (thanks to Raul Jimenez’s famous Chilean) and a painful defeat in Costa Rica, although a victory for the Americans in Panama gave the pass to the Mexicans towards the playoff against New Zealand, where Gimenez was no longer considered by Miguel ‘Piojo’ Herrera.

Now it is expected that the history of Santiago in the Tri will be more fortunate than that of his father. In addition, there is another goal that Christian could not achieve either: to be champion of the Liga MX with Cruz Azul.

From Tata Martino’s itinerant office they have put up a sign for all Mexicans: striker wanted. Given the drop in performance of Raul Jimenez and the exclusion of Javier Chicharito Hernandez, the Mexico coach has opened the search. Among the waiting list is 21 year old Santiago Gimenez, a footballer who has been signed by Feyenoord in the Netherlands until 2026. The Mexican came to a League where they have specialized in training home and foreign footballers to sell them to the big clubs in Europe.

Santi Gimenez chose to play with Mexico thanks to the dual nationality of his father, the idol of Pachuca and Cruz Azul: Christian Chaco Giménez, who was able to train with the Albiceleste led by Diego Armando Maradona in 2010 and a couple of matches with El Tri during 2014. El Chaco enrolled his first-born in the Cruz Azul academy with the hope that he would follow in his footsteps. The father remained for seven years in the club without being able to win the championship. On the other hand, the son lifted the league title when he was just 20 years old. This also ended the team’s dreadful streak of 23 years of finals losses.

Feyenoord’s new striker made his senior Mexico team debut in November 2021 in a friendly against Ecuador. Martino, given the lack of fine attackers, began to give him a chance. Santiago Gimenez shared striking duties with Raul Jimenez, a striker for Wolverhampton in the Barclays Premier League, with Rogelio Funes Mori, from Monterrey and with Henry Martín from America. The controversy surrounding Chicharito’s return to the national team has been settled by the Argentine coach who no longer considers him a probable member of the team. Jimenez, despite himself, has not been able to regain the confidence or level that he showed before the brutal skull fracture he suffered in 2020.

Santiago Gimenez traveled to Rotterdam on Tuesday and finalized his contract this Friday when he was announced by the 15-time champion of the Dutch Eredivisie and winner of the 1969-1970 European Cup. The club signed him a week after the start of the Dutch League. The World Cup in Qatar will begin for Mexico on November 22 against Poland. Santiago Gimenez features prominently on the Mexican World Cup team and he will be expected to perform well for the squad will have to score goals against the clock if he wants to sneak into the final list.