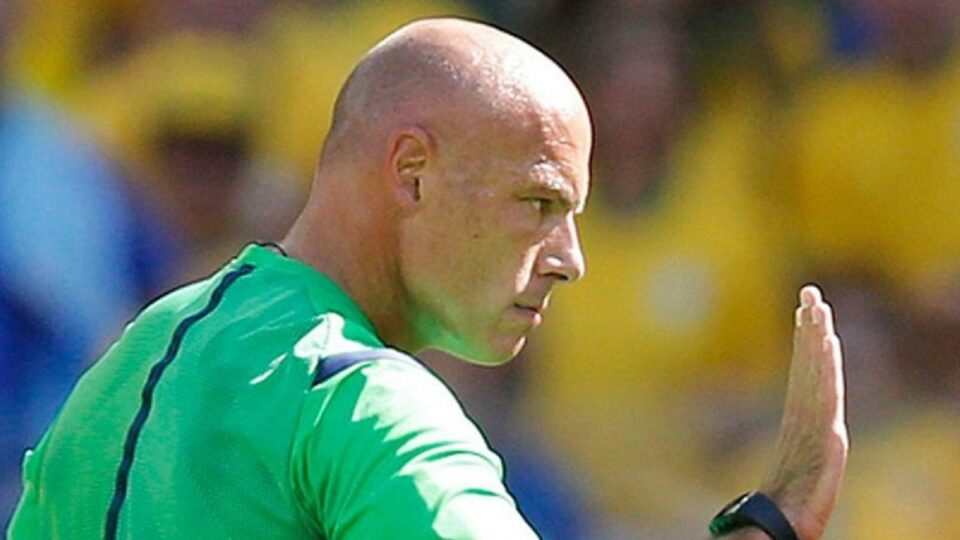 When it comes to football, Referees are one of the most important parts of the game. Their decisions have a great impact on the matches. FIFA has National camps all around the globe to train the best referees. FIFA International Referees List consists of all the referees recommended by the different national organizations. Ken Aston, a former member of the FIFA Referees’ Committee, was the first to introduce yellow and red cards. These cards were first used in 1970 by referees at the FIFA World Cup held in Mexico. According to FIFA, referees can wear jerseys of five colors, i.e., black, green, yellow, red, and blue. The shorts and the socks must be black. In this article, we have provided you with a list of the top 10 best football referees of all time.

Frank de Bleeckere is famous globally for his world record of seven times Belgian Referee of the Year. He achieved this remarkable triumph during the period from 2000 to 2013. He debuted in 1984, and he then worked as a FIFA-affiliated referee from 1998 to 2012.

His debut match was in 2002 between Cyprus and Ireland at the FIFA World Cup Qualifier. That match was held on 24th March 2001. Since then, he continued refereeing a lot of matches in his international career.

Oscar Ruiz is a retired football referee from Colombia. He is regarded worldwide as the best Colombian referee of all time. He was an active FIFA associated referee during time of 1995 to 2011.

Presently Oscar works as an active member of the referee instructor group associated with FIFA. His debut international match was on 12th July 1995. The match was played between Venezuela and Paraguay. He was an important part of three consecutive FIFA World Cups, i.e., the 2002 World Cup, the 2006 World Cup, and the 2010 World Cup.

He received a tremendous amount of criticism when he sent odd Yoann Gourcuff in the final match of the group stage. That match was played between France and South Africa. When he retired from refereeing, he became an active member of CONMEBOL’s referee assistance program. Oscar is also a lawyer besides being a football referee.

Pedro Proenca is a former Portuguese football referee. He is regarded as one of the best referees of modern times. He continues to be a part of international football. Pedro was the first referee to play both the Champions League and European Championship finals in the same year.

Pedro became a FIFA-associated referee in the year 2003. He was also listed in the UEFA’s Elite group in the year 2009. He was awarded the Best Referee Of The Year by the Portuguese Football Association in 2007 and 2011.

Pedro Proenca was also awarded the title of the World’s Best Referee in the year 2012. He played in international matches only and was a part of many important club matches. He even played as a referee in many matches in the FIFA World Cup that was held in Brazil in 2014.

Michel Vautrot is a retired football referee from France. He is considered one of the most admired referees in the world. He is famous for a funny decision at the FIFA World Cup held in the year 1990. He was the one who added 8 minutes of stoppage time in the semi-final match between Argentina and Italy. The reason for this was that he forgot to check the tie on his watch.

He was the referee in two FIFA World Cup 1982 and three matches of the 1990 World Cup. He was also a part of the 1983 World Cup Final at Tokyo stadium.

Michel also refereed in three European Championships that were held during the period from 1984 to 1988. He was also a part of the 1986 Euro Cup Final match between FC Barcelona and FC Steaua Bucharest.

Michel was also named as the World’s Best Referee twice by the IFFHS. He was heavily criticized when FC Roma was banned by FIFA for bribing him with Euro 50,000.

Peter Mikkelsen is regarded as the greatest Danish football referee of all time. He was a FIFA-associated referee during his prime days. Peter played as a referee in two matches of the 1990 World Cup that was held in Italy. He was just 30 yrs old at that time.

In the 1994 FIFA World Cup in the USA, Peter played as a referee in three matches. Putting aside International football, Peter was also a part of the UEFA European Championship tournaments in 1992 and 1996.

He was named as the World’s Best Referee twice by IFFHS in the years 1991 and 1993. He retired from refereeing after the WC Qualifiers in 1998.

He also worked in the HR department of the Danish organization F-Group for 10 years. He died on 30th January 2019 due to cancer.

Sandor Puhl is a retired football referee from Hungary. He is known globally as the world’s one of the best referees in football history. Sadly, he was criticized a lot due to his negligence in the 1994 FIFA World Cup quarter-final. The match was played between Spain and Italy, where Tassotti elbowed Enrique on his face in the penalty box area that broke Enrique’s nose.

He was heavily criticized by FIFA for not giving a penalty or simply a card, and as a result, he was suspended for eight international matches.

He became well known for his presence in the final of 1994 WC final between Italy and Brazil. Puhl was named the World’s best referee four times by IFFHS from 1994 to 1997.

He was also the DEPUTY Chairman of the Hungarian Football Association. He served the association from 2000 to 2006.

Kim Milton Nielsen is an ex-football referee from Denmark. He is famous worldwide for his huge height of 6 feet 6 inches. He looked taller than most of the international players. He has played as a referee in 154 international matches. He was also a part of 53 Champions League matches during his majestic career.

His first match as a FIFA associated referee was in the year 1988 at the age of 28. He retired from his service on 16th May 2006 as he attained the UEFA age limit of 45. He was a part of two 1998 World Cup matches that were held in France. He also played as a referee in the semi-final match of the 2002 World Cup between Turkey and mighty Brazil.

He refereed in crucial matches of the Champions League and the Euro Cup. Putting aside his football career, he is also an IT Manager.

Howard Webb is an ex-football referee from England. He retired from refereeing on the 6th of August, 2014. After that, he became the Technical Director of the Pro Match Officials Board.

He provided his service as a FIFA associated referee from the year 2005 to 2014. He was also a part of the Premier League matches from the year 2003 till his retirement. In a single year, he became the first man to serve as a referee in both the Finals, i.e., the World Cup Final and Champions League Final.

Webb also played as a referee in many Finals of the FA Cup and the FA Community Shield. He was awarded as the Best Referee by FIFA in the year 2010. Before his refereeing career, he served as a sergeant in the Yorkshire Police.

Markus Merk is a former football referee from Germany. He is known globally as the best referee of his time. He holds the great record for refereeing the highest number of matches in the Bundesliga.

He provided his service as a FIFA associated referee from 1993 until his retirement in 2008.

Presently he is the main commentator of Lig TV, a Turkish channel that covers the Turkish Super League. Putting aside his refereeing career, he is a professional dentist.

Pierluigi Collina is a former football referee from Italy. He served his role as a FIFA associated referee from the year 1995 to 2005. He was awarded “Best Referee of the Year” by FIFA consecutively six times. He is globally regarded as the best referee of all time.

Currently, Collina is an active member of the UEFA Referees Association. He is also the Chief Head of The Ukraine Football Federation from the year 2010. He is also known by his nickname ‘Kojak’ because of his bald look due to alopecia.

He served as a referee in many crucial and significant matches in football history. He was a part of the 2002 World Cup Final that was held between Germany and Brazil. HE also officiated the Champions League Final between Bayern Munich and Manchester United in the year 1999.

The IFFHS, i.e., the International Federation of Football History and Statistics, first introduced the ‘World’s Best Referee of the Year’ award in 1987. Romualdo from Brazil was the first referee to get this award. Some other great referees are Robert Wright, Kassai, Cuneyt Cakir, and Kuipers.