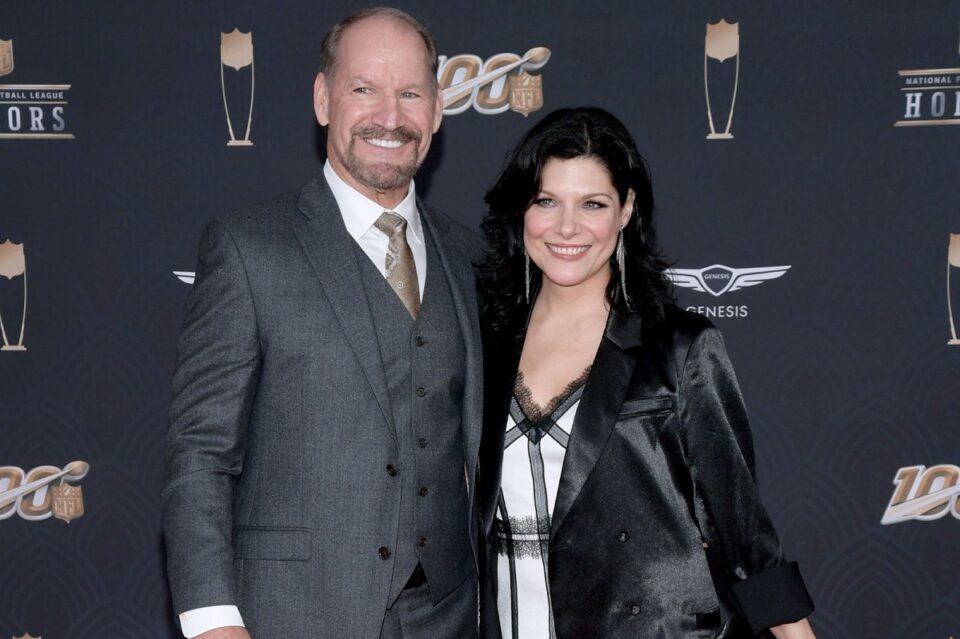 Veronica Stigeler is one amongst the lucky thousands who become famous thanks to their loved ones who are celebrities. In the case of Veronica Stigeler, despite being a singer by trade, she gained the most recognition following her marriage to NFL Star Bill Cowher.

Likewise, as many may know, William Cowher aka Bill Cowher is an American football coach, a linebacker who is a former player for the Philadelphia Eagles. The NFL Hall of Famer got married to Veronica Stigeler in 1993 and their relationship is still going strong in 2022, even enduring the symptoms of COVID 19 together! Let’s take a look at this couple’s life.

9 Veronica Stigeler Facts To Know If You Love Bill Cowher!

Most people do not know that Veronica is a truly gifted musician who met her husband by chance. Although her career has not been as exciting as her husband’s, she still deserves attention. Let’s look at these 9 interesting facts about Veronica Stigeler’s life in and out of the spotlight.

In 2020, Bill Cowher revealed that he suffered from coronavirus along with his wife Veronica Stigeler and this would lead to his Hall of Fame induction ceremony being postponed.

The former Pittsburgh Steelers head coach and Hall of Fame inductee told The Athletic that he and his wife, singer Veronica Stigeler — known by the stage name Queen V — were not tested for the virus when they first came down with symptoms in March, but they did test positive for antibodies just a month later. The couple first realized something was wrong when they lost their sense of smell and taste after returning from a trip from Honolulu, a last-minute change from a planned trip to visit Cowher’s daughter, Lindsay, and son-in-law. Ryan Kelly in Tokyo.

Son-in-law Kelly, a former NBA player, was playing in Japan’s B League when the league suspended competition in March 2020. On the return trip, they passed through Newark Liberty International Airport and went to dinner in New York City before the restaurants began to close. After that, Cowher told The Athletic, he and his wife began experiencing what would eventually be unmistakable symptoms of coronavirus. In addition to loss of smell and taste, both suffered from trembling joints. Cowher had a slight fever, and his wife had a hacking cough. They were both in New York.

2. Veronica Stigeler and Cowher recovered from the virus:

A member of the Pro Football Hall of Fame Class of 2020, Cowher was due to be inducted in 2021, along with Steelers safeties Troy Polamalu and Donnie Shell, a Centennial Class pick, but those ceremonies and celebrations have been delayed for a year.

Cowher told The Athletic of the delay in the celebration saying: “I’m actually a little bit relieved, because much as you want to be thoughtful and talk about the people who were instrumental in your life, now is not the time, not only because of COVID but with social justice issues”.

Veronica Carla Stigeler was born on February 23, 1974 , in New York City, New York (United States). However, being in the entertainment industry has not led her to divulge information regarding the whereabouts of her parents or siblings. The singer holds American citizenship by birth and is a Caucasian female with mixed European ancestry.

In terms of her childhood hobbies, Veronica had an innate affinity for music from an early age. Therefore, we can assume that she was part of a high school band and eventually took her passion to college if she attended any. Also, judging by her singing ability and guitar playing techniques, it seems to many Veronica received some form of professional training during her youth. With a guitar in hand and an ounce of hope, she would embark on the journey to find her voice, primarily as a solo artist.

4. Veronica Stigeler’s career as a musician:

For starters, Veronica who goes by the name Queen V has been a singer for more than half her life. In the meantime, the New Yorker has managed to release several singles, albums and EPs, which have their own fan base. Similarly, songs like Best of Me, Slip Away, and Good Girls were among the most streamed songs on her entire album.

Besides being a singer, Stigeler is also good at songwriting and composing. Chad Carlson, a fellow musician, is a longtime collaborator and close friend of Veronica. Together, the musical duo has also uploaded several songs to Spotify, and you are strongly advised to listen to what The New Yorker has crafted.

Veronica Stigeler one minute at the recording studio, next minute writing songs, often performs live at several New York bars and pubs. For example, Folk House of Ulysses, The Cutting Room, and a designer called Alice and Olivier are, to name a few. Despite this, Bill Cowher’s Wife even holds fundraisers during her shows to show her support for the LGBT community. Above all, she has partnered with the NHL and You Can Play Foundation to increase the involvement of the LGBT community.

Veronica Stigeler may have won Bill’s heart, but she became the second to do so. Initially, they were both married to different people. To illustrate, Stigeler tied the knot with an unnamed basketball player but broke up with the mystery man for an undisclosed reason. Similarly, the NFL player was also married to a basketball player, Kaye Cowher, in 1993. The two had a beautiful marriage filled with family and loved ones.

However, in Bill’s case, there was no sudden rift between him and his wife. Instead, the lovely Kaye died of a debilitating illness in 2010. Eventually, the grieving NFL legend had to take a while to open up to love again, and the same was true with Veronica. Nevertheless, Cowher’s daughters and loved ones knew what he was going through, and only love will help him fill the void.

Soon enough as fate would have it, Veronica and Bill met by pure coincidence. There was no denying how the sparks flew at that moment, and what Stigeler needed was a man who would cherish and uplift her, and she found that in Cowher.

Veronica Stigeler soon got acquainted with her future step daughters and as a result, the lovebirds exchanged their “I do’s” in 2014. Apart from being a stepmother, Cowher’s daughters from her previous marriage, Meagan, Lauren, and Lindsay, treat Stigeler like a family member and their second mother.

Likewise, Queen V wants to represent self-esteem and is conscious of spreading body positivity while maintaining physical fitness. The 48-year-old has an ectomorphic frame with a perfectly sculpted frame on her Instagram. Additionally, the singer boasts shoulder-length black hair, a signature look that goes well with her fair complexion. Most importantly, Veronica has gorgeous green eyes, a pointed nose, and a bulky square face.

7. What is Veronica Stigeler’s net worth?

Being a musician for almost two decades, Stigeler has an impressive net worth estimated at around $500,000. The sum is pretty decent considering Veronica’s low-key musical pursuit. Additionally, online sources claim that the Cry Your Eyes singer receives around $46,000 to $65,000 annually. Also, most of her albums are available on an online platform and probably earn a significant amount of money from these streaming services.

Moving to Bill Cowher, this famous NFL linebacker has a net worth that rivals most of his teammates at the time. Apparently, that’s a whopping $18 million and, even at age 62, is a huge income from his role as a studio pundit for CBS. Similarly, from his job as an analyst, the former NFL legend comes home with $4 million of a big package every year. On the other hand, as a coach of the Pittsburgh Steelers, Cowher amassed a stunning $2 million annually. Additionally, when the club decided to extend Bill’s contract in 2001, the deal saw him pocket $7 million over three years and earn a $ 2.8 million bonus.

The residence of Veronica Stigeler and Bill Cowher also has a decent value. Indeed, the NFL icon resides with his wife in a condo in Central Park that was purchased for $2.65 million. Bill owns another property in Raleigh, North Carolina, which cost him $ 2.39 million and later sold for $1.8 million. Well, a small loss isn’t so bad for someone with a bountiful fortune like Cowher.

The musician who goes by the stage name Queen V is quite active on social media platforms such as Instagram and Twitter where you can keep up with her hobbies and her husband’s personal life.

9. Other FAQs about Veronica Stigeler:

Who is Veronica Stigeler?

Veronica is a well-known singer and musician. Additionally, she is best known as the wife of football coach Bill Cowher.

How old is Veronica Stigeler?

Since Bill Cowher’s Wife was born on February 23, 1974, she turns 48 in 2022.Although she is approaching her fifties, an age when many musicians like her try to calm down and leave a haven of peace, the passion of the New Yorker does not seem to be extinguished.

Yes, Bill Cowher the former Pittsburgh Steelers head coach is married to Veronica Stigeler. Previously, he was married to Kaye Cowher. The North Carolina native and Bill were married for 27 years before divorcing in 2010.

Where does Bill Cowher live?

In 2018, the former NFL coach put his Raleigh home up for sale to settle permanently in New York. Therefore, he currently lives in New York.