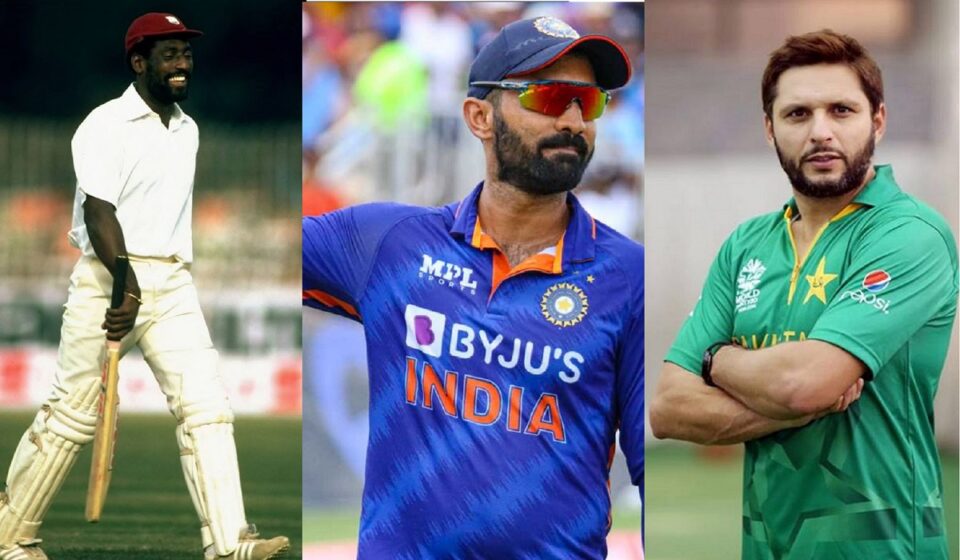 In cricket, when a match starts changing its stance at the last turn, the team sends a batsman in who wins by playing in his own style, which is why he is called a finisher in the language of cricket.  What makes these amazing batsmen the best finishers in cricket is that no matter how much pressure, as soon as they come to the field, it starts raining fours and sixes. Every ball that comes out of his bat looks desperate to touch every part of the field. Thus, the people on the name of this list have become the most reliable batsmen to fist the match.

16 Of The World’s Best Finishers In Cricket: Who Are They?

What Does It Mean To Be The Best Finishers In Cricket?

The history of cricket is full of great victory leading performances by batsmen who are always remembered for their brilliant batting at the end of the match. That’s why he is called the best match finisher. As we know, all teams need a good finisher who can take the team out of the ground in the last overs. What is the job of a match finisher?

The upper order batsmen get plenty of time, they don’t even have to bear that much pressure but for a match finisher the conditions are just the opposite. They absolutely NEED TO stun everyone with their ability – which is why finishing the game is a big deal!

Here Are 16 Best Finishers In Cricket In The World

The Englishman has also been called a “360-degree” cricketer. Due to his ability to spot and manipulate opposing team’s field placements while scoring all over the pitch. As such, the wicketkeeper has taken his game to new heights and is now regarded as the greatest finisher in the world. Jos Buttler is the wicket-keeper batsman of the England cricket team but also has the full ability to get the ball across the boundary and he has shown the bowlers many times that no one can snatch the match without him. He is the best match finisher in the world after Dhoni today.

Richards gave new dimensions to cricket which is why his name is one of the most dangerous batsmen of his time. Many big records are recorded in the name of Richards, which no one has been able to break.

Shakib Al Hasan made his ODI debut with the Bangladeshi cricket team in 2006 against Zimbabwe in Harare. After this, he continued to touch the heights and is also called the number one all-rounder. He also captained the Bangladesh team for some time. His role in the Bangladesh cricket team has always been as a finisher and he has also taken full advantage of it.

His name is included in the most dangerous batsmen of this time because he scored a total of 19000+ runs in all formats. He was the only batsman whose batting average was above 50. Their strike rate has also remained above 100. Along with the South African team, he has also ruled the hearts of Indian people while playing for Royal Challengers Bangalore in IPL.

JP Duminy has been playing for the South African national team for a long time and has become a veteran of the team. He became one of the most reliable batsmen in the South African line-up as a finisher. They have the ability to turn the game anytime. Duminy has scored 4767 runs in 184 ODIs at an impressive average of 37. Along with this, he has also scored 25 half-centuries and 4 centuries and has played many match-winning innings.

De Silva, who runs like lightning in the middle of the wicket, is one of the finest batsmen of Sri Lanka. He has the ability to win the match in any situation. In the 1996 World Cup, when he stepped on the pitch, the score was 23 runs for 2 wickets. He had one of the best innings in ODI cricket. De Silva has won many matches on the strength of his bat.

Sarfaraz Ahmed made his international debut for Pakistan in 2007 against India in Jaipur. He became the captain of the Pakistan team and also won the ICC Champions Trophy title for his country.  The Right-handed middle order batsman has helped the Pakistan team swiftly in such conditions many times to get the team out of trouble.

This South African batsman is very famous for being one of the best finishers in cricket. Boucher is a wicket keeper as well as a great batsman. Boucher’s skill is how to win a losing match. In the losing match, he turned the dice of the entire match several times with a barrage of runs coming out of his bat. During the pressure at the end of the match, his hobby is to reduce the game pressure with the balls on the boundaries.

Abdul Razzaq’s name comes among the best all-rounders of Pakistan. Batting or bowling, Razzak is an expert in both fields. Razzaq, a straight-handed player, knows how to stay on the pitch from the beginning of the innings till the end. For example, Razzaq scored 47 runs in 11 balls against England in 2005.

Lance is one of the best finishers in cricket. This South African batsman knows very well to turn the tide of the match. His bat knows very well which part of the ball will go to the ground. In between 8 to 10 overs, Lance can turn the tide of the entire match. During the 1999 One Day World Cup cricket tournament, Lance scored 250 runs with 17 wickets. Including two half centuries.

Another one of the best finishers in cricket is Pakistan’s explosive batsman Javed Miandad. He is considered a complete player in every way, making him one of the best batsmen in one day cricket.

Shahid Afridi used to start flying the very first ball. The former Pakistan player has scored more than 10,000 runs in all formats. Afridi has given the best performance in ODI cricket. In whichever match this all-rounder has performed wonderfully, that match has definitely been won by his team: Pakistan.

Australia’s middle-order left-handed batsman Mike Hussey is one of the best finishers in cricket in the world. Hussey knows when, and where to turn the game, and ways to increase the low run rate with a barrage of runs in his left-hand game. No one can forget Mike’s destructive batting against Pakistan in the semi-finals of the T20 World Cup.

Mahendra Singh Dhoni has come to bat mainly on such occasions when the balls are few and the number of runs is very high and the condition of the bowlers becomes very bad.

Dhoni launched himself in 2005. In which he played a brilliant inning of 148 runs against Pakistan. Dhoni scored 28 runs in 13 balls to lead India to victory against West Indies. After 28 years in 2011, he won the World Cup for India by playing an innings of 91 runs.

All-rounder Michael Bevan is called the best finisher of ODI cricket as he has the power to change the course of the match in just a few balls. He has played many memorable innings in the 1990s, with a lot of flair. He was the most dangerous finisher of that era. They used to chase the target as if it was very easy for them to do so. Most influentially, even the word “finisher” was used in cricket because of this. The more pressure there was, the more dangerous they became. He played a special role for his team in the 1999 and 2003 World Cups.

In the last place, we have the name Dinesh because Karthik has been known as a finisher. He performed brilliantly while playing for Bangalore in IPL. This was the reason that he got a chance to play for Team India as well. Karthik is seen batting brilliantly in T20.

Is The Best Wrestler In India Sushil Kumar Anymore?